Tricky TV is a British television show that aired on CITV from 2005 to 2010, presented by magician Stephen Mulhern. The show featured street magic, pranks, illusions, and step-by-step how-to guides for magic tricks.

The show featured magic tricks such as making a tank vanish or making an entire football team appear. The "wicked wind-ups" segment included a gorilla that came to life, a cinema with exploding popcorn, and unstoppable drinks machines. "Beat the Cheat" exposed classic confidence tricks. Each show usually closed with a performance of a classic "grand illusion", such as sawing a woman in half. 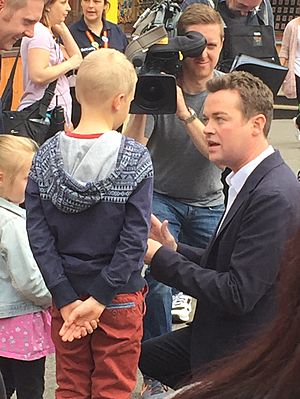 Mulhern performing a magic trick to a child at Chessington World of Adventures during filming of the show.

In Series 1 and 2, each episode featured one or more special guest celebrities, who often took part in a number of tricks during the show, and sometimes participated in the show's closing illusion. In series 3, the format was redesigned with Mulhern presenting and a 'Tricky Team' of young magicians performing the illusions.

Series 3 consisted of twenty episodes, and ran from 14 September – 15 October 2010. Episodes 1-14 were presented by Stephen Williams.

Tricky Quickies was a cut-down version of the show with a duration of five minutes. Series 1 had 10 episodes, while series 2 had 15 episodes.

The Quick Trick Show was a sister show of Tricky TV, also presented by Mulhern, and also featuring magic tricks, "wicked wind-ups", illusions, and step-by-step guides to tricks. Five series were produced and aired on CITV between 1999 and 2002.

Tricky TV was aired in Southeast Asia on Cartoon Network Asia, in Germany on Super RTL, in the Arab World on MBC 4, in Iceland on Stöð 2, in Norway on NRK Super, in Canada on VRAK.TV, in India on Nickelodeon, in Hong Kong on ATV World and in Japan on Disney XD.

All content from Kiddle encyclopedia articles (including the article images and facts) can be freely used under Attribution-ShareAlike license, unless stated otherwise. Cite this article:
Tricky TV Facts for Kids. Kiddle Encyclopedia.