Trico Mountain is a 6,640+ft (2,020+m) mountain summit located 10 mi (16 km) south of Stevens Pass on the common border of King County, Kittitas County and Chelan County in Washington state. "Trico" is a portmanteau of triple county. This peak is part of the Wenatchee Mountains, which are a subset of the Cascade Range, and is situated 20 mi (32 km) west of Leavenworth in the Alpine Lakes Wilderness. Trico is a triple divide peak with precipitation runoff from the mountain draining south into Cle Elum River, northwest into Deception Creek, and northeast into Leland Creek, which is a tributary of Icicle Creek. The scenic Tuck and Robin Lakes are set on the south slopes, between Trico and Granite Mountain, which is 1.6 mi (2.6 km) to the southeast. The Pacific Crest Trail skirts below the western aspect this peak as it crosses Deception Pass.

Most weather fronts originate in the Pacific Ocean, and travel northeast toward the Cascade Mountains. As fronts approach, they are forced upward by the peaks of the Cascade Range, causing them to drop their moisture in the form of rain or snowfall onto the Cascades (Orographic lift). As a result, the west side of the Cascades experiences high precipitation, especially during the winter months in the form of snowfall. During winter months, weather is usually cloudy, but, due to high pressure systems over the Pacific Ocean that intensify during summer months, there is often little or no cloud cover during the summer. The months July through September offer the most favorable weather for viewing or climbing this peak. 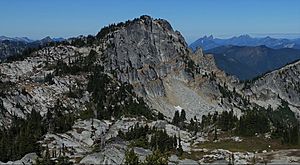 All content from Kiddle encyclopedia articles (including the article images and facts) can be freely used under Attribution-ShareAlike license, unless stated otherwise. Cite this article:
Trico Mountain Facts for Kids. Kiddle Encyclopedia.