Tropical Storm Arthur was a strong tropical storm. It did not last very long. It also did not take place during the usual storm season. It affected the U.S state of North Carolina in May 2020. Arthur was the first named storm of the 2020 Atlantic hurricane year. With Arthur, 2020 became the sixth year in a row when a tropical cyclone formed in the Atlantic before June, or when the official hurricane season starts. Tropical Storm Arthur came from a big trough that formed on May 14 near Cuba. The early part of the storm system slowly drifted toward Florida through the Florida Strait for two days. Later, it became a depression on May 16 north of The Bahamas. This started the Atlantic storm season. One day later, the system was named "Arthur" and it slowly moved north towards North Carolina. Arthur started to weaken as it moved towards Bermuda. 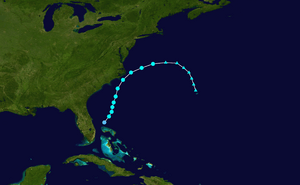 Arthur's path as a storm

On May 12, the National Hurricane Center (NHC) first said it was likely a tropical storm would form near Cuba. By May 13, there were more thunderstorms than usual in Cuba, and the NHC said there was a 70% chance of a tropical storm in the next five days.

The NHC named it Tropical Depression One on May 16. They called it tropical because of the way it turned around.

The NHC named the system Tropical Storm Arthur early on May 17 because people on an airplane had measured the wind. They said it was strong enough to be named. Arthur mostly moved north and in the Atlantic Ocean, not too close to the Florida and Georgia. However, Arthur started moving northeast over colder waters. Even though Arthur was moving over cold water, it still became stronger, even though it was smaller in images. As Arthur became stronger, its center moved onto the coast of North Carolina, a few miles southeast of Cape Hatteras. Then Arthur moved away from North and South Carolina, and it started to be less organized. However, the storm continued to become stronger. Early on May 19, Arthur had its lowest air pressure of 990 mb (29 inHg) and its winds were strongest at 60 mph (95 km/h). Six hours later, the storm was no longer tropical. Arthur finally dissipated on May 21, 5 days after it became a depression.

Arthur rained a lot on Cuba on May 15. In some parts of Cuba, there were almost 3 inches in only four hours. The rain damaged homes and flooded streets. Arthur also damaged buildings in the Bahamas, which had already been hit by Hurricane Dorian one year before. Arthur caused floods and blew away tents that people were living in while they were rebuilding their homes. However, Arthur's strongest winds blew over the ocean, where there were no buildings to blow down. 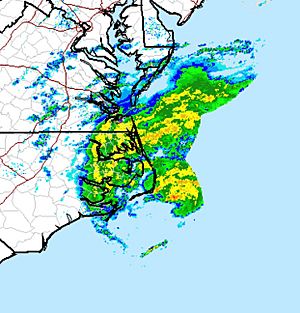 Arthur at its closest to North Carolina

Arthur was not a tropical storm until after it reached Florida. When it was in Florida, it was a system. Still, Arthur dropped a lot of rain and wind on Florida on May 13 and 14. It dropped over 4 inches (101.6 mm) of rain on parts of Florida and a rainfall total of 5.35 in (135.8 mm) fell on May 14, where it was the tenth highest amount of rain for the city ever. Flash flood warnings were created for large portions of Miami-Dade County on May 14. In Miami, streets were flooded from the rain. High-speed winds made officials use gale warnings and special marine warnings across most of South Florida. Seventy people in Volusia County had to be rescued after being caught in rip currents. Three of them had to go to the hospital. Purple and red flags were raised along the coasts of Georgia and South Carolina to tell people about the rip currents. Offshore Georgia, 3-6 ft (0.9-1.8 m) waves were seen. Arthur did $112,000 of damage to Florida.

Arthur also went to North Carolina as a tropical storm. On May 16, tropical storm watches were issued from Surf City to Duck (a city) and Pamlico Sound to Albemarle Sound. A day later, these watches were upgraded to tropical storm warnings as Arthur moved closer towards the Outer Banks. By late May 17, the water in the southern portion of the Outer Banks had become dangerous. Torrential rainfall occurred as Arthur's outer rainbands were near eastern North Carolina, with 4.92 in (125 mm) of rain falling in Newport, North Carolina within 6 hours, and many other locations recording at least 3 in (76 mm) of rain from the storm. Tropical storm-force wind in Cape Hatteras were also recorded. Despite this, the strongest winds were kept off land. This is because Arthur was an uneven storm. Waves as high as 12.5 ft (3.8 m) were recorded along the coast of the Outer Banks from Arthur. Due to flooding from Arthur, many highways in the Outer Banks and into mainland North Carolina were closed. SpaceX also had to delay the launch of a few Starlink internet satellites because of bad weather from Arthur affecting them. As Arthur moved away from land, warnings were canceled.

Other places in the United States

In James City County, Virginia, flooding near the ocean was seen in some places. In south New Jersey, Arthur caused floods, even though it was not a tropical storm then. There were also strong winds on the Jersey Shore. Power lines were blown down. On the Atlantic City Expressway and other roads, trees had fallen.

All content from Kiddle encyclopedia articles (including the article images and facts) can be freely used under Attribution-ShareAlike license, unless stated otherwise. Cite this article:
Tropical Storm Arthur (2020) Facts for Kids. Kiddle Encyclopedia.