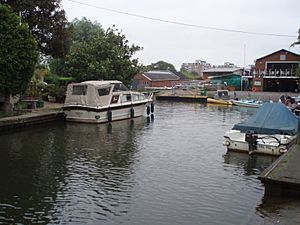 Trowlock Island is a residential island in the River Thames 450 metres (490 yd) upstream of Teddington Lock on the non-tidal Kingston reach less than 10 metres from the northern bank, in the London Borough of Richmond upon Thames, England. 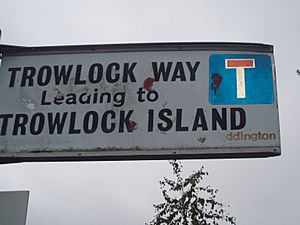 Teddington Lock's Weir is a large structure on the same side of the river by Teddington Studios and the Lensbury Club, which is 450 m (490 yd) downstream. From the Thames Path crossing across the Lock in the north Ham is accessible. From the Teddington riverside by the island, stations of Hampton Wick and Teddington are 1.4 kilometres (0.87 mi) and 1.9 kilometres (1.2 mi) respectively by foot or road and therefore the centre of Hampton Wick is closer to the island than any other settlement.

Trowlock Island contains 29 bungalows in plots as well as the Royal Canoe Club's clubhouse and gym. Trowlock Island is about a third of a mile (535 metres) long with a path down the middle and houses on either side. Beyond the last house is a lightly wooded area with moorings on both the main river and the backwater.

Like many islands in the Thames, the form of the island has changed over time, being shown as three separate islets on John Rocque's map of 1746. The name derives from Trow, a type of barge averaging 50–60 tons. Harry Gibbs' boat building firm was located on the island in 1910. 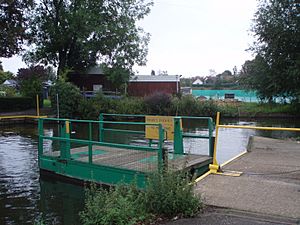 The only access to the island is by way of a hand wound chain ferry.

Trowlock Island Limited manages the shared infrastructure of the island and its board of directors is elected by the shareholders — each bungalow or plot of land carries with it a number of shares so that all houseowners plus the Royal Canoe Club collectively own the company. The Canoe Club has made a recent significant investment in providing new facilities for young people, including a new gym, boatsheds and training facility. Included in this re-development is a plan for encouraging bio-diversity, such as bats (pipistrelle and Daubenton's bat being the species most likely to be found in the area), water fowl and rare species of cultivated plants.

A short of a video of Trowlock island in summer, that takes a viewer around the island, is available.

The island, with surrounding water and banks of reach of the Thames are home to numerous species of wildlife; the following can be seen as nesting nearby:

All content from Kiddle encyclopedia articles (including the article images and facts) can be freely used under Attribution-ShareAlike license, unless stated otherwise. Cite this article:
Trowlock Island Facts for Kids. Kiddle Encyclopedia.