Trumansburg is a village in Tompkins County, New York, United States. The population was 1,797 at the 2010 census. The name is a variant spelling of the surname of the founder, Abner Treman. (The family routinely spelled it several different ways.) The village's application for a post office preserved one of them. The Village of Trumansburg is located within the Town of Ulysses and is northwest of Ithaca, New York.

The village was incorporated in 1872, in the former Central New York Military Tract. The village was originally named "Tremaine's Village", after an early settler, Abner Tremaine (Tremain, Treman or Truman), who was granted the land for his service in the American Revolutionary War. The village was built around a cascade on the creek that provided power for grain mills.

In the 19th century Trumansburg was dominated by Col. Hermon Camp, an officer in the War of 1812 who settled in what was to become the village. For many years he was the local postmaster, and founded a bank, now the Tompkins Trust Company, the largest bank in the county. His imposing and elegant Federal style house remains the largest in the village. The Hermon Camp House was listed on the National Register of Historic Places in 1973. Also listed on the National Register of Historic Places are the First Presbyterian Church of Ulysses, William Austin House, Indian Fort Road Site, and Second Baptist Society of Ulysses.

In the latter half of the 20th century, as the quality of the road between Trumansburg and Ithaca improved and "country living" became more fashionable, the village became home to many faculty and staff at nearby Cornell University and Ithaca College, as well as many musicians. Between 1961-70, Robert Moog built electronic music equipment including Theremins and his famous synthesizers in a downtown storefront. 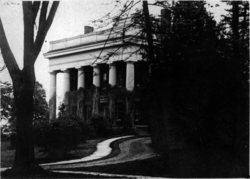 From 2004 to 2007, the mayor was John R. Levine, the original author of The Internet for Dummies.

The life of the village

Trumansburg was a milltown and commercial center for the agricultural community from its inception until the Second World War. Since the late 1940s it has become a combination of a bedroom suburb for Ithaca and a modest tourist destination, with restaurants, and antique stores. Since 1973 the village's best known business has been the Rongovian Embassy to the USA, a bar and restaurant that frequently features local, national and international musical talent. Since 1991, the Finger Lakes GrassRoots Festival of Music and Dance has taken place each July at the village fairgrounds and is hosted by nationally popular Trumansburg-based band Donna the Buffalo. The village is also located along the Cayuga Wine Trail and is close to Taughannock Falls.

Other cultural resources include the [1] Ulysses Philomathic Library, a member of the Finger Lakes Library System, the Trumansburg Conservatory of Fine Arts, which offers concerts and music lessons, the Ulysses Historical Society Museum, with collections of local historical material, and the Trumansburg Central School District Foundation, which provides financial support for local educational programs. 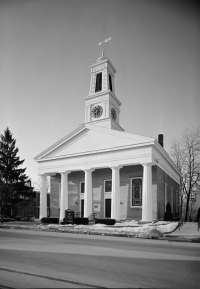 Baptist, Catholic, Episcopalian, Methodist, and Presbyterian churches are located within the village, with a Baptist church and a meetinghouse of the LDS Church located just outside the village limits.

The Trumansburg Central School District consists of the Elementary School, Russel I. Doig Middle School, and Charles O. Dickerson High School, all of which share a campus at 100 Whig Street. School and local athletic teams use the nickname the Blue Raiders.

Trumansburg is bisected by NY Route 96, a state highway, enlarged and re-routed in 1961, that runs north to Waterloo and south to Ithaca. Tompkins Consolidated Area Transit (TCAT) (Route 21) provides local bus service to Ithaca with connections to long distance bus and air service there.

In the 19th century, Trumansburg had a port at Frontenac Point, at the mouth of the Trumansburg Creek on Cayuga Lake. The lake is connected at its north end to the Erie Canal via the Cayuga-Seneca Canal. The docks, warehouses and hotels that made up the port have long since been torn down or have burned. Only scattered pilings remain, and the site is now a camp owned by the local Boy Scout council.

The Lehigh Valley Railroad ran through Trumansburg between 13 September 1873 and October 1962, when the portion south to Ithaca was abandoned and most of the easements sold to the New York Gas & Electric Company (NYSEG). The portion north to Geneva was abandoned in 1967. In the last 15 years the state park system has bought back much of the right-of-way and is in the process of constructing a biking and hiking trail along the portion south to Ithaca. It is called the Black Diamond Trail, after the Lehigh Valley's premier passenger train that ran between New York City and Buffalo along the line (although not stopping in Trumansburg).

There were 682 households out of which 33.6% had children under the age of 18 living with them, 48.5% were married couples living together, 10.3% had a female householder with no husband present, and 37.8% were non-families. 33.0% of all households were made up of individuals and 15.2% had someone living alone who was 65 years of age or older. The average household size was 2.32 and the average family size was 2.97.

All content from Kiddle encyclopedia articles (including the article images and facts) can be freely used under Attribution-ShareAlike license, unless stated otherwise. Cite this article:
Trumansburg, New York Facts for Kids. Kiddle Encyclopedia.