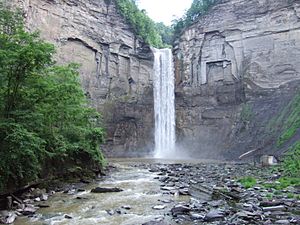 Ulysses is a town located in northwest Tompkins County, New York, U.S. The population was 4,900 at the 2010 census. The town was named after the hero of the Odyssey.

The Town of Ulysses is northwest of the city of Ithaca and is in the northwest part of Tompkins County.

Much of the town is devoted to dairy farms and fruit orchards, but the proximity to Ithaca has also brought a large number of professionals, academics and artists to the town.

The eastern town line is at Cayuga Lake, one of the Finger Lakes. The town's northern boundary line is the border of Seneca County.

Ulysses is located in the former Central New York Military Tract, which was used to pay soldiers of the American Revolution. It was named by Robert Harpur in 1790 for the hero of Homer's Odyssey. The town was first settled around 1790.

The town once contained the towns of Dryden (est. 1803), Enfield (est. 1821) and Ithaca (est. 1821 and named for Ulysses' home in ancient Greece). Ulysses was organized in 1794 while still a part of Onondaga County. The village of Trumansburg, the main settlement in Ulysses, was started by Abner Treman in 1792.

Communities and locations in Ulysses

All content from Kiddle encyclopedia articles (including the article images and facts) can be freely used under Attribution-ShareAlike license, unless stated otherwise. Cite this article:
Ulysses, New York Facts for Kids. Kiddle Encyclopedia.