Kids Encyclopedia Facts
This page is about town of Ithaca. For the legally distinct city, see Ithaca, New York.

Ithaca is a town in Tompkins County, New York, United States. The town's population was 19,930 at the 2010 census. The town is in the central part of the county, in the Finger Lakes–Southern Tier region of New York, and is part of the Ithaca Metropolitan Statistical Area. The Town of Ithaca is a horseshoe-shaped portion of the metropolitan area of Ithaca, New York, surrounding the City of Ithaca and being the city's only border.

The Sullivan Expedition of 1779 passed through this region. The town is in the former Central New York Military Tract. The Town of Ithaca was created from part of the Town of Ulysses in 1821. In 1865, Ezra Cornell, supported by New York State, provided funds and land to found Cornell University. 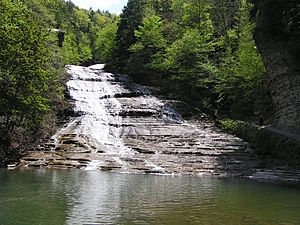 The falls at Buttermilk Falls State Park, located along Rt. 13 in the south part of the Town of Ithaca

The town is at the foot of Cayuga Lake, one of the Finger Lakes. The town borders all other towns in Tompkins County, with the exception of the Towns of Caroline and Groton. It also borders both the eastern and western shores of Cayuga Lake. Fall, Cascadilla, and Six Mile Creeks, the Cayuga Inlet and Buttermilk Creek flow through the town to Cayuga Lake.

Ithaca College is in the town, south of the city center. The main campus of Cornell University is located just to the east, partly in the City and partly in the Town.

There were 6,427 households out of which 24.2% had children under the age of 18 living with them, 45.6% were married couples living together, 5.4% had a female householder with no husband present, and 47.1% were non-families. 32.6% of all households were made up of individuals and 11.5% had someone living alone who was 65 years of age or older. The average household size was 2.25 and the average family size was 2.83.

Communities and locations in the Town of Ithaca

The City of Ithaca has a completely separate government, and is not part of the town. The two entities form a single community for most practical purposes, for instance, sharing a local school district and many municipal services. Many of the town's government offices, such as the Town Hall, are located within the city, outside of the town's jurisdiction.

All content from Kiddle encyclopedia articles (including the article images and facts) can be freely used under Attribution-ShareAlike license, unless stated otherwise. Cite this article:
Ithaca (town), New York Facts for Kids. Kiddle Encyclopedia.