USS Orleck (DD-886), was a Gearing-class destroyer in service with the United States Navy from 1945 to 1982. In October 1982 she was sold to Turkey and renamed Yücetepe (D 345). After her final decommissioning the Turkish government transferred Yücetepe to the Southeast Texas War Memorial and Heritage Foundation at Orange, Texas, where she was berthed as a museum ship. The Orleck Foundation then decided to move the ship to the Calcasieu River in Lake Charles, Louisiana.

She was named after Lieutenant Joseph Orleck USN (1906–1943), commanding officer of USS Nauset, killed in action when the ship was sunk by German aircraft in the Gulf of Salerno on 9 September 1943, and posthumously awarded the Navy Cross. 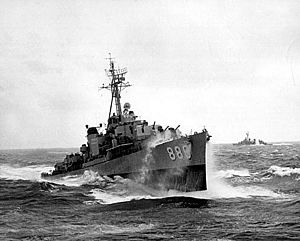 Orleck operated with the 7th Fleet in support of United Nations Forces during the Korean War.

Orleck underwent an extensive FRAM I overhaul in 1962.

On 7 June 1965, Orleck assisted in the recovery of the Gemini IV space capsule.

During the Vietnam War, Orleck served as plane guard for aircraft carriers on "Yankee Station" in the Gulf of Tonkin, participated in "Operation Sea Dragon", patrolled on search and rescue duties, and carried out naval gunfire support missions.

Orleck was decommissioned on 1 October 1982 and stricken from the Naval Vessel Register on 6 August 1987.

Orleck was transferred to Turkey for service in the Turkish Navy. She was renamed TCG Yücetepe (D 345) in Turkish service.

On 12 August 2000, the Turkish government transferred Yücetepe to the Southeast Texas War Memorial and Heritage Foundation at Orange, Texas, for use as a memorial and museum under her old name, USS Orleck.

When Hurricane Rita stuck the Texas coast in September 2005, Orleck was severely damaged. After repairs, Orleck was ready to return to her pier at Ochiltree-Inman Park; however, the City of Orange refused to allow her to return. Orleck was temporarily relocated to Levingston Island, then moored north of Orange Harbor Island.

On 6 May 2009, the Lake Charles, Louisiana, City Council voted in favor of an ordinance authorizing the City to enter into a Cooperative Endeavor Agreement with USS Orleck. On 20 May 2010 it moved to Lake Charles, Louisiana where it is now on display. The grand opening in Lake Charles occurred on 10 April 2011. As of 2019 the ship was currently facing closure of the museum with the ship being either sunk or scrapped; however the museum remained operational.

In 2019, following the failure to acquire USS Charles F. Adams (DDG-2) as a museum ship in Jacksonville, Florida, it has been proposed by to acquire Orleck and move her to the proposed berth that was obtained for the Charles F. Adams. The USS Adams Association studied Orleck and deemed that she would survive the tow from Lake Charles to Jacksonville. The proposal is under consideration. 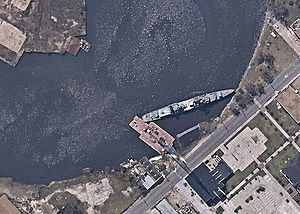 Museum ship USS Orleck aground after Hurricane Rita in 2005.

In February 2020, the move to Jacksonville was confirmed. She would remain open in Lake Charles until March 1, 2020, before closing in preparation for an inspection by the US Coast Guard for towing to dry dock in Texas for repairs before making the tow to Jacksonville.

The tow to Jacksonville was delayed by the COVID-19 pandemic. She broke loose from her mooring in the Calcasieu River during Hurricane Laura, drifting a mile down stream before drifting aground with some damage.

All content from Kiddle encyclopedia articles (including the article images and facts) can be freely used under Attribution-ShareAlike license, unless stated otherwise. Cite this article:
USS Orleck Facts for Kids. Kiddle Encyclopedia.