Valley Mills is a city in Bosque and McLennan counties in central Texas, United States. The population was 1,203 at the 2010 census.

The McLennan County portion of Valley Mills is part of the Waco Metropolitan Statistical Area.

Valley Mills was named for a flour mill established on the banks of the Bosque River in 1867 by Dr. E.P. Booth and Asbury Stegall.

In 1881, the Gulf, Colorado and Santa Fe Railway laid tracks a mile south of the community, across the Bosque River. Merchants, hoping to benefit from the railroad, began moving their stores across the river, to the tracks.

On February 17, 1882, a cyclone (tornado) hit the new townsite, destroying a large number of buildings. Nevertheless, the remaining residents from the community's original site moved across the river and rebuilt their homes. Thus, by the end of 1882 Valley Mills had extended into McLennan County.

Dairy farming and stock raising were the principal industries of the community. By 1900, however, the railroad and the nearby Chisholm Trail had made Valley Mills a prosperous retail and trading center for Bosque and McLennan counties. The community's population reached 855 by 1905. Like many rural Texas communities, Valley Mills declined during the 1930s. Following World War II, however, as farm prices increased and ranching prospered, the economy grew, and the population, which had declined to 803 by 1937, increased to 1,037 by the mid-1950s. During the next three decades Valley Mills maintained its position as a leading retail market and shipping point for Bosque and McLennan counties.

The town was hit by an F-5 tornado on May 6, 1973, nearly 20 years after the infamous 1953 Waco Tornado, and despite its F-5 rating, there were no deaths in the Valley Mills tornado.

There were 430 households, out of which 33.3% had children under the age of 18 living with them, 52.8% were married couples living together, 11.9% had a female householder with no husband present, and 30.0% were non-families. 28.6% of all households were made up of individuals, and 15.8% had someone living alone who was 65 years of age or older. The average household size was 2.49 and the average family size was 3.03.

The climate in this area is characterized by hot, humid summers and generally mild to cool winters. According to the Köppen Climate Classification system, Valley Mills has a humid subtropical climate, abbreviated "Cfa" on climate maps. 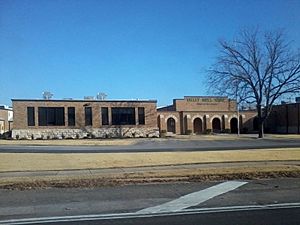 All content from Kiddle encyclopedia articles (including the article images and facts) can be freely used under Attribution-ShareAlike license, unless stated otherwise. Cite this article:
Valley Mills, Texas Facts for Kids. Kiddle Encyclopedia.