The Walnut Lane Bridge is a concrete arch bridge located in Northwest Philadelphia that connects the Germantown and Roxborough neighborhoods across the Wissahickon Creek in Fairmount Park. While drivers may cross the bridge too quickly to notice, the view from underneath the bridge has inspired many artists and writers, such as Christopher Morley. The design was copied from Pont Adolphe in Luxembourg.

The Walnut Lane Bridge was added to the National Register of Historic Places in 1988.

The chief engineer was George S. Webster, assisted by Henry Quimby, both of the Philadelphia Department of Public Works. At the time of its construction, the bridge was the longest and highest concrete arch bridge in the world. While $240,000 was originally committed to the project, the figure rose to nearly $260,000 by completion (equivalent to nearly $6 million in 2008).

The bridge was a direct product of the City Beautiful Movement in Philadelphia in the early years of the 20th century. Seeking to provide community harmony and cooperation through improved public spaces, the bridge was viewed as an achievement that could unite the communities and cultures of Roxborough and Germantown in addition to inspiring a greater civic engagement. It was also believed that more beautiful construction techniques could help to reform a corrupt political system within the city. The Philadelphia community members rallied around the construction of the bridge and the opening was highly anticipated by all ages alike.

The bridge was opened on October 14, 1908 and was formally dedicated on December 16 of the same year. Students from nearby schools participated in the dedication ceremony by marching toward the middle of the bridge and singing "Hail Philadelphia." The ceremony ended with a reception at a local inn with the traditional Wissahickon meal of catfish and waffles.

Other bridges confused with the Walnut Lane Bridge 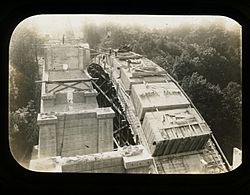 A rare lantern slide which will be part of the Walnut Lane Bridge Centennial exhibition.

In 2008, Cliveden, a National Historic Landmark and museum in Germantown owned by the National Trust for Historic Preservation, celebrated the 100th anniversary of the completion of the bridge. Only a few blocks from the Walnut Lane Bridge, Cliveden hosted an exhibition and educational program on the construction of the bridge, featuring a collection of rare lantern slides. The exhibit ran from May through October.

All content from Kiddle encyclopedia articles (including the article images and facts) can be freely used under Attribution-ShareAlike license, unless stated otherwise. Cite this article:
Walnut Lane Bridge Facts for Kids. Kiddle Encyclopedia.