Waterloo is a city in and county seat of Monroe County, Illinois. The population was 9,811 at the 2010 census.

Waterloo's history dates back to the 18th century, with the French being the first Europeans to settle in the area. The site was ideal because of its elevation; the proximity of the Mississippi River Valley brought frequent flooding to the lowlands. It was also close to Fort de Chartres, a French stronghold. They named their settlement Bellefontaine, meaning 'beautiful spring.' This name related to a spring of water a mile south of the site of Waterloo, a frequent campsite on journeys between Kaskaskia, Cahokia, and St. Louis. France had long since abandoned the area, as it had been ceded to Britain in the wake of the Seven Years' War in 1763 and had since been unoccupied.

James Moore and many of the settlers that followed him had been soldiers in George Rogers Clark's Illinois campaign of 1778. They named their settlement Bellefontaine, meaning 'beautiful spring.' This name related to a spring of water a mile south of the present-day site of Waterloo, a frequent campsite on journeys between Kaskaskia, Cahokia, and St. Louis. The first documented English-speakers came, in the spring of 1782, when James Moore, Larken Rutherford, and James Garretson, of Maryland and Virginia, settled at or near Bellefontaine. Upon their arrival, they were the first permanent English-speakers, in the entire Northwest Territory. Moore established himself at the site of the namesake spring, and the tract remained in possession of the Moore family for over a century. The kitchen of the Bellefontaine House, situated a short distance west of the southern end of Main Street, is believed to be Moore's original log cabin. It was restored and remains as a local landmark.

The Rutherford family settled in the vicinity, while the Garretsons selected a location a mile northeast of the spring. Judge Shadrach Bond, uncle and namesake of Illinois first governor, was also a part of the Moore party of settlers. It had been assumed that when these immigrants left the country east of the Alleghenies that the settlers would not come into conflict with the natives. However, it was not long before the new settlers began to feel threatened, and James Moore was elected captain of the company raised for the protection of the colony. At this point in time Illinois was considered a county of Virginia, and so the commission received by Captain Moore came from the Governor of Virginia, Patrick Henry. He was directed to establish a military post and command the Illinois militia. Moore's company was one of four raised from Illinois, which along with six others raised elsewhere that would later become the 17th U.S. Infantry.

A fort (or blockhouse) was accordingly built at Bellfontaine, and during the Indian Wars it was one of the most frequented places of sanctuary. Captain Moore made considerable effort to establish amicable relations with the Native Americans, and it was finally with the help of Gabriel Cerré, a wealthy merchant of St. Louis, that he achieved peace by establishing a trade agreement between the warring factions. One of Moore's sons, James B. Moore, would later be a delegate to the convention that framed the first Illinois Constitution and was eventually elected to the State Legislature. Other settlers came to the area and by 1800, Bellefontaine's population had reached 286, making it the third largest town in Illinois and representing over a tenth of the then-total population of the territory. 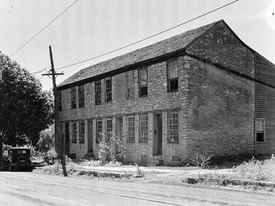 Stone structure built by Emery Peters Rogers in 1830, known as the Peterstown House.

In 1816, a man named Emery Peters Rogers arrived in the area from Massachusetts and, four years later, opened the first permanent store, mill, and quarry. Peters, as he preferred to be called, built a stone structure in 1830 at the north end of Main Street to serve as his store as well as a stagecoach stop. Now known as the Peterstown House, it is still standing, and was placed on the National Register of Historic Places on November 16, 1977. Due to his influence, the neighborhood around Peters's store came to be referred to as Peterstown. As the years passed, the town was divided into two parts: Bellefontaine at the south and Peterstown at the north. The two communities were divided by a creek, and there was said to have been intense rivalry between them. Legend has it that in 1818, a man named Charles Carroll, an Irishman, came upon the scene, and to the astonishment of the Peterstown men and the Bellfontainers, ignored the rivalry and built his house on one side of the creek, his barn on the other and said “It won’t be Bellefontaine, and it won’t be Peterstown, but begorra, I’ll give ye’s both your Waterloo.”

Emery Peters Rogers' brother, Dr. John Rogers, arrived in 1826 and would come to be known as the region's leading physician. David H. Ditch's log home-turned-hotel was converted into a courthouse in 1825, when Waterloo was declared the county seat. In 1836 the town contained no more than twenty buildings, including a small, two-story brick courthouse, a Methodist church, a log building used as a schoolhouse, a wind-powered mill, and a blacksmith's shop.

The town was inhabited by several notable residents throughout the 1800s. George Forquer of Pennsylvania purchased a considerable portion of land in 1818, working closely with Daniel P. Cook to plan out the rapidly developing town. Forquer would later serve as an Illinois State Senator, the 5th Secretary of State of Illinois (1825–1828), the 5th Illinois Attorney General (1829–1832) and, most famously, an early political enemy of Abraham Lincoln. Cook was a prominent lawyer, and later a member of Congress, giving his name to Cook County. Forquer's younger half brother, Thomas Ford, would become the State's governor.

The town experienced a marked population increase after 1840, and that is when the German population got its impetus, the original German settlers having arrived in the 1830s or even earlier. Some came from populations in the former colonies, but many came directly from Germany, either overland from the East Coast ports, or upriver from New Orleans. These came in search of their own land, and to escape the widespread political unrest in Germany at the time. Many of the city's buildings, its citizens, and especially its local character still reflect the heritage left by those German settlers. Many calques and idioms, such as those found in Pennsylvania Dutch English persist, and there are a number of German words which commonly sprinkle casual conversation.

On December 1, 1978, its historic district was recognized and placed on the National Register of Historic Places. The City of Waterloo also has been recognized for its work through Sister Cities International. On October 2, 1980, Waterloo announced a Sister Cities partnership (officially recognized April 1981) with Porta Westfalica in (then) West Germany. Due primarily to the efforts of Vera Kohlmeier of Waterloo and Helmut Macke of Porta Westfalica, it came about as a result of genealogical research, which concluded that perhaps two-thirds of Monroe County's German population could trace their ancestry back to this region of northern Germany.

Porta Westfalica itself came about in 1973 as a conglomeration of 15 villages into a city of over 40,000. Located on the Weser River in northern Germany, Porta Westfalica is situated in a valley between two large hills. Trips by large groups typically occur every two years, including visits by the Waterloo German Band and the Bläserkreis, Porta's 70-member youth brass band. Charitable donations have also been raised for East German refugees and the victims of the 1993 flood. This partnership, which goes by the portmanteau Portaloo, has since assised other communities in the area to establish Sister Cities programs of their own, including Columbia/Gedern, Belleville/Paderborn, and Millstadt/Groß-Bieberau. "Portaloo" has been honored with seven coveted Readers Digest awards for its Sister Cities program. Every summer this city holds it annual "Porta Westfalica Fest" or "PortaFest" in honor of its sister city. 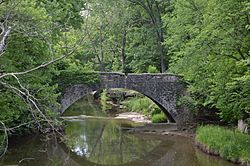 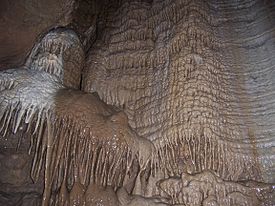 Waterloo has a number of public and parochial schools. All public schools are a part of Waterloo Community Unit District #5.

According to the Illinois Department of Commerce and Economic Opportunity, schools in Waterloo had a total combined enrollment of 3,284 students being instructed by 210 total teachers.

All content from Kiddle encyclopedia articles (including the article images and facts) can be freely used under Attribution-ShareAlike license, unless stated otherwise. Cite this article:
Waterloo, Illinois Facts for Kids. Kiddle Encyclopedia.