Monroe County is a county located in the U.S. state of Illinois. According to the 2010 census, it had a population of 32,957. Its county seat and largest city is Waterloo.

Monroe County is included in the St. Louis, MO-IL Metropolitan Statistical Area. It is located in the southern portion of Illinois known historically as "Little Egypt".

Indigenous peoples lived along the Mississippi River and related waterways for thousands of years before European contact. French Jesuit priests in the Illinois Country encountered the Kaskaskia and Cahokia, bands of the Illiniwek confederacy.

The first European settlement in this area was St. Philippe, founded in 1723 by Philippe François Renault, a French courtier, on his concession about three miles north of Fort de Chartres along the Mississippi River. This early agricultural community quickly produced a surplus, and grains were sold to the lower Louisiana colony for years. They were integral to that community's survival, as its climate did not allow cultivation of such staple grains.

After the American Revolution, Monroe County was formed in 1816 out of Randolph and St. Clair counties, as the 8th county created from the then Illinois Territory.

It was named in honor of James Monroe, who had just served as United States Secretary of War and who was elected President later that same year. Its first county seat was Harrisonville, named for William Henry Harrison, former governor of the Northwest Territory and future President. Harrison invested in several tracts of land in the American Bottoms above Harrisonville, mostly in the present precinct of Moredock, ownership of which he retained until his death.

Waterloo was designated as the mantle of county seat in 1825. The sites of the colonial towns of St. Philippe and Harrisonville were submerged by the Mississippi River, in flooding caused by deforestation of river banks during the steamboat years. Crews cut so many trees that banks destabilized and collapsed in the current, making the river wider and more shallow from St. Louis to the confluence with the Ohio River. This change caused more severe flooding, as well as lateral channel changes, such as the one that cut off the village of Kaskaskia from the Illinois mainland.

An unincorporated community of Harrisonville was re-established east of the original site. The bounds of Monroe County in 1816 did not include Precincts 1 and 6 (village of Hecker and Prairie du Long), Precinct 1 and most of 6 was added in 1825 from St. Clair County. The strip of Precinct 6 from the survey township line east to the Kaskaskia was added, once again from St. Clair, two years later in 1827. Some minor adjustments and clarifications of the boundaries have taken place, but the borders have remained essentially static since 1827.

The western part of the county on the Mississippi River is part of the American Bottom floodplain, while the eastern portion of the county is relatively flat and was originally prairie. The transition zone between has high bluffs of limestone and dolomite and has distinctive Karst topography with numerous sinkholes, caves, and springs.

Main north-south corridor and the backbone of Monroe County

Also called the Valmeyer highway or Hecker highway, west and east of Waterloo, respectively, it runs from the bluffs of the Mississippi to the Kaskaskia

The area's main link with central and eastern St. Clair County for those not near Hecker

runs along the bluffs from Palmer Rd. northwest of Columbia, through old Valmeyer and Chalfin Bridge, past Fults to Prairie du Rocher in Randolph County

runs from Illinois Route 3 in Waterloo (as Lakeview Drive) through Wartburg and Maeystown to Bluff Rd. at Chalfin Bridge

Runs from Route 3 west, past New Hanover down the Fountain Gap to Bluff Rd. at Miles Rd. and B Rd.. Marks approximate future border between Columbia and Waterloo.

Runs from the Mississippi River levee opposite Crystal City, Missouri, west across Bluff Rd. up the bluffs at Monroe City, through Madonnaville, across Maeystown Rd., through Burksville and Burksville Station, across Route 3 to J Rd. south of Route 156

There is a regular MetroBus express bus, 502X Waterloo-Columbia, running from Waterloo, through Columbia, to the MetroLink station in East St. Louis. 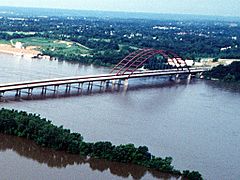 The closest access to and bridges over the Kaskaskia are downriver at Baldwin in Randolph County and upriver at New Athens in St. Clair County. South of Monroe County, there is a ferry across the Mississippi in Randolph County, providing access to Ste. Genevieve, Missouri and Pere Marquette State Park, and a bridge at Chester.

While the railroad played a large part in the history and development of the county, the main line through the county, running along Illinois Route 3, has been abandoned and removed. However, Union Pacific tracks run through the Bottoms from the intermodal yard at Dupo in St. Clair County, running roughly parallel to Bluff Rd. which crosses them several times, through old Valmeyer and Fults on past Prairie du Rocher in Randolph County. The tracks are still in use, but carry only freight, and have no stops in Monroe County.

There is a small airfield in the Bottoms west of Columbia called Sackman Field.

For census and election purposes, Monroe County is currently divided into 26 numbered precincts (1-27, for some reason there is no Precinct 14). However, for geographical, genealogical, and historic purposes the older, named precincts are of greater utility.

named for the ubiqitous limestone cliffs it sits atop and which run along its western bounds.

formerly Eagle Precinct from the original French name for their settlement, L'Aigle

after John Moredock, territorial legislator, and Major commanding a battalion in the War of 1812

named after the settlement began by James Lemen, a confidante of Thomas Jefferson, in 1786

from hybrid French/English "Long Prairie", it was added in 1825, after the county's genesis, the strip along the river in 1827.

also a settlement, for Philip Francois Renault of the French Company of the Indies, an early exploiter of the area

formerly Fountain Precinct, from Fountain Creek which runs though it on its way to the bluffs and down to the river

All content from Kiddle encyclopedia articles (including the article images and facts) can be freely used under Attribution-ShareAlike license, unless stated otherwise. Cite this article:
Monroe County, Illinois Facts for Kids. Kiddle Encyclopedia.