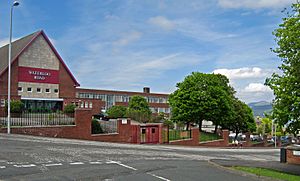 Waterloo Road is a British television drama series created by Ann McManus and Maureen Chadwick. It first was shown on BBC One from 2006 to 2014, In 2015 the last series was shown on BBC Three.

The series is in a school and it's about the lives of various school children and teachers.

All content from Kiddle encyclopedia articles (including the article images and facts) can be freely used under Attribution-ShareAlike license, unless stated otherwise. Cite this article:
Waterloo Road (TV series) Facts for Kids. Kiddle Encyclopedia.