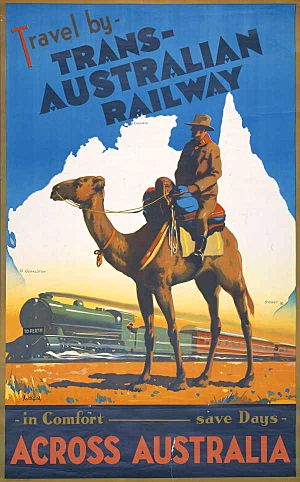 The Trans-Australian Railway crosses the Nullarbor Plain of Australia from Port Augusta in South Australia to Kalgoorlie in Western Australia. It includes a 478 kilometres (297 mi) stretch of dead-straight track, the world's longest, between the 797 km (495 mi) post west of Ooldea and the 1,275 km (792 mi) post west of Loongana.

The line forms an important freight route between Western Australia and the eastern states. Currently two passenger services also use the line, the Indian Pacific for its entire length and The Ghan between Port Augusta and Tarcoola.

Earlier passenger services on the route were known as the Great Western Express. 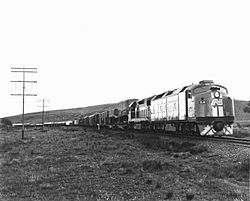 In 1901, the six Australian colonies federated to form the Commonwealth of Australia. At that time, Perth, the capital of Western Australia, was isolated from the remaining Australian States by thousands of miles of desert terrain and the only practicable method of transport was by sea, a time-consuming, inconvenient and often uncomfortable voyage across the Great Australian Bight, a stretch of water known for rough seas. One of the inducements held out to Western Australians to join the new federation was the promise of a federally funded railway line linking Western Australia with the rest of the continent.

In 1907 legislation was passed, allowing for the route to be surveyed. The survey was completed in 1909 and proposed a route from Port Augusta (the existing railhead at the head of Spencer Gulf in South Australia's wheatfields) via Tarcoola to the gold mining centre of Kalgoorlie in Western Australia, a distance of 1063 miles (1711 km). The line was to be to the standard gauge of 4 ft 8+1⁄2 in (1,435 mm), even though the state railway systems at both ends were narrow gauge at the time. Its cost was estimated at £4,045,000.

Legislation authorising the construction was passed in December 1911 by the Andrew Fisher Government and work commenced in September 1912 in Port Augusta.

Work proceeded eastwards from Kalgoorlie and westwards from Port Augusta through the years of the First World War. By 1915, the two ends of the line were just over 600 miles (966 km) apart with materials being delivered daily. Construction progressed steadily as the line was extended through dry and desolate regions until the two halves of the line met on 17 October 1917.

Commonwealth Railways was established in 1917 to administer the line.

The entire intercity route was not converted to standard gauge until 1970.

In 2008, its engineering heritage was recognized by the installation of markers provided by the Engineers Australia's Engineering Heritage Recognition Program to the platform at the Port Augusta Station in South Australia and the ticket office at Kalgoorlie Station in Western Australia.

On inauguration, the passenger service was known as the Great Western Express. Towards the end of its life as a mixed gauge service, between Kalgoorlie and Port Augusta it was usually known as the Trans-Australian. From February 1970 the service became the Indian Pacific.

From the start of construction until 1996 the Tea & Sugar Train carried vital supplies to the isolated work sites and towns along the route.

The final distance was 1051.73 miles (1692.60 km), slightly less than the original survey. At no point along the route does the line cross a permanent fresh watercourse.

Bores and reservoirs were established at intervals, but the water was often brackish and unsuitable for steam locomotive use, let alone human consumption, so water supplies had to be carried on the train. In the days of steam locomotion, about half the total load was water for the engine.

According to Adelaide-born astronaut Andy Thomas, the line is identifiable from space, because of its unnatural straightness. "It's a very fine line, it's like someone has drawn a very fine pencil line across the desert," he has said.

Most of the stopping locations in the 129° E to 134° E part of the railway in South Australia (except for Deakin, which is 3 km (1.9 mi) inside Western Australia's state border) were named after the first seven Australian Prime Ministers.

Other federal ministers from the 1900–1917 era occur outside of this sequence amongst stopping places on the rail route. 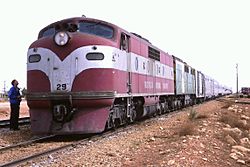 Because of the inevitable problems of finding suitable water for steam locomotives in a desert, the original engineer, Henry Deane envisaged diesel locomotives for the line. He got as far as making enquiries with potential manufacturers. Unfortunately, a scandal involving the supply of sleepers led to Deane's resignation before the diesel locomotive proposal had advanced beyond the point of no return.

All content from Kiddle encyclopedia articles (including the article images and facts) can be freely used under Attribution-ShareAlike license, unless stated otherwise. Cite this article:
Trans-Australian Railway Facts for Kids. Kiddle Encyclopedia.