Wawa is a township in the Canadian province of Ontario, located within the Algoma District and associated with Wawa Lake. Previously known as the township of Michipicoten, after a nearby river of that name, the township was officially renamed in 2007 for its largest community of Wawa.

This area was first made for fur trading. In the late 19th century, both gold and iron ore were found and mined, leading to the region's rise as the steel industry developed in Sault Ste. Marie, Ontario. From 1900-1918 the Helen Mine had the highest production of iron ore of any mine in Canada.

The township includes the smaller communities of Michipicoten and Michipicoten River, which are small port settlements on the shore of Lake Superior. These names are from the Ojibwe term for the river.

The municipal council is made up of one mayor and four councillors. The current mayor is Ron Rody. Councillors Tamara Liddle, Bill Chiasson, James Neufeld and Yvan Besner were elected on October 27, 2014 for four years. After James Neufeld resigned on April 27, 2015, Matthew Morrison was appointed to fill the empty seat on August 10, 2015. In 2016, Councillor Tamara Liddle and her husband, Gerry Liddle were investigated and it was revealed that both Gerry Liddle and Councillor Tamara Liddle harassed CAO Chris Wray to try and get a personal benefit to avoid paying taxes. Both were punished by town council. After the 2018 elections, Ron Rody was victorious as mayor and the following councillors were elected: Bill Chiasson, Mitch Hatfield, Robert Reece, and Pat Tait. 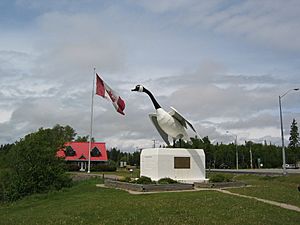 The community is known for its 8.5-metre (28-foot) metal statue of a Canada goose, which was built in 1960, and was dedicated to the community in 1961. Wawa takes its name from the Ojibwe word for "wild goose", wewe. Wawa was called wild goose in The Song of Hiawatha. On July 5, 2010, the Canada Post made a commemorative stamp of the Wawa Goose as part of its Roadside Attractions collection. On July 1, 2017, a new Wawa Goose was made to replace the second aging goose.

The town is also known for snowmobiling and sport fishing. The Voyageur Hiking Trail passes through the town. One important shopping location is Young's General Store, home of the locally famous Pickle Barrel.

All content from Kiddle encyclopedia articles (including the article images and facts) can be freely used under Attribution-ShareAlike license, unless stated otherwise. Cite this article:
Wawa, Ontario Facts for Kids. Kiddle Encyclopedia.