West Bridgewater is a town in Plymouth County, Massachusetts, United States. The population was 6,916 at the 2010 census.

West Bridgewater was first settled in 1651 as a part of Olde Bridgewater. The town separated from Bridgewater, Massachusetts and was officially incorporated in 1822, the second of the three communities to separate from Bridgewater (after North Bridgewater, now Brockton, and before East Bridgewater) over the span of three years. The town, like many in the area, had both agrarian and industrial roots; the Town River provided water power for milling and irrigation for farming. The town is home to the oldest standing parsonage in the U.S. (the Keith House, 1662). The town is also believed to be the site of the first industrial park in the U.S., now the site of the Town Park. The original Ames Shovel Works was located in the Town Park. Today, the town is mostly residential. 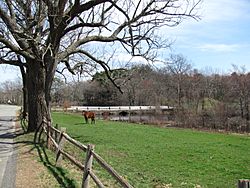 A field on the Town River

According to the United States Census Bureau, the town has a total area of 15.7 square miles (40.6 km2), of which 15.3 square miles (39.7 km2) is land and 0.35 square miles (0.9 km2), or 2.25%, is water. The town ranks 238th of 351 communities in the Commonwealth in terms of land area, and ranks nineteenth out of the twenty-seven towns in Plymouth County. West Bridgewater is bordered by Brockton to the north, East Bridgewater to the east, Bridgewater to the south, and Easton to the west, as well as a small section (less than a quarter of a mile long) of the southwestern corner that borders the town of Raynham. West Bridgewater's town center is approximately 4 miles (6.4 km) south of the center of Brockton, and is 25 miles (40 km) south of Boston.

West Bridgewater lies along the northeast edge of the Hockomock Swamp, with a large section of the southwestern corner of town being covered by the swamp and its wildlife management area. There are also several other protected areas throughout the town, as well as several parks and a large pond surrounded by a state forest. The Town River also passes through the southern portion of town, branching off into several brooks throughout the town, as does the Salisbury River in the northeast corner of town.

Massachusetts Route 24 passes through the western half of town, with an exit at Route 106. Route 106 passes from east to west in the town, and meets at the center of town with Route 28. The Middleborough/Lakeville Line of the MBTA's commuter rail service passes through town, between the towns of Middleborough and Lakeville and South Station in Boston. There are no stops in West Bridgewater, but there are stops in Bridgewater and the Campello section of Brockton. There are no airports in the town; there are small strips in nearby Taunton and Mansfield, but the nearest national air service is at Logan International Airport in Boston. The town used to have rail service at Matfield Junction, Cochesett station. Matfield Junction was on the Middleborough branch of the Old Colony line, and Cochsett was on the Easton railroad branch; both were abandoned in the 1930s.

All content from Kiddle encyclopedia articles (including the article images and facts) can be freely used under Attribution-ShareAlike license, unless stated otherwise. Cite this article:
West Bridgewater, Massachusetts Facts for Kids. Kiddle Encyclopedia.