Brockton is a city in Plymouth County, Massachusetts, United States; the population was 95,314 in the 2015 Census. Brockton, along with Plymouth, are the county seats of Plymouth County. Brockton is the seventh largest city in Massachusetts and is sometimes referred to as the "City of Champions", due to the success of native boxers Rocky Marciano and Marvin Hagler, as well as its successful Brockton High School sports programs. Two of the villages within the city are Montello and Campello, both have the distinction of having their own MBTA Commuter Rail Stations and post offices. Campello is the smallest neighborhood in the city, but also the most populous. Brockton hosts a baseball team, the Brockton Rox. Brockton is one of the windiest cities in the United States, with an average wind speed of 14.3 mph.

In 1649, Ousamequin (Massasoit) sold the surrounding land, then known as Saughtucket, to Myles Standish as an addition to Duxbury. Brockton was part of this area, which the English renamed Bridgewater, until 1821, when it became the town of North Bridgewater. Its name changed in 1874, after a contentious process finally decided on naming it after Isaac Brock, after a local merchant heard of Brockville, Ontario, on a trip to Niagara Falls. Brockton became a city on April 9, 1881. During the American Civil War, Brockton was America's largest producer of shoes, and until the latter parts of the 20th century Brockton had a large shoe and leather products industry.

Brockton is mostly an urban setting, lying along the Salisbury Plain River, which once powered the many shoe factories of the city. To the northeast lies the Beaver Brook Conservation Land, attached to the southern end of the Ames Nowell State Park in Abington. There are several parks throughout the city, but the largest is D.W. Field Park, an Olmsted-inspired park which includes ponds, Waldo Lake and Brockton Reservoir in Avon, as well as a golf course.

The median income for a household in the city was $39,507, and the median income for a family was $46,235. Males had a median income of $34,255 versus $26,886 for females. The per capita income for the city was $17,163. About 12.1% of families and 14.5% of the population were below the poverty line, including 19.4% of those under age 18 and 12.6% of those age 65 or over. Statistically, Brockton is the most populous and most densely populated community in Plymouth County. It is the sixth largest community in the commonwealth, the largest of the sub-100,000 person cities. However, it is only the twenty-seventh most densely populated community in the Commonwealth.

Data is from the 2009-2013 American Community Survey 5-Year Estimates.

Brockton has its own bus services, operated by the Brockton Area Transit Authority (BAT). Each bus has a designated route running through a section of Brockton, i.e. Montello, Campello, Cary Hill, etc. There are also buses that have routes outside the city. i.e. Bridgewater Industrial Park, Ashmont Station (MBTA subway end-of-line), Stoughton and a connecting bus stop in Montello to the Braintree Station (MBTA subway end-of-line).

The Middleborough/Lakeville Line of the MBTA's commuter line passes through the city on the eastern side, with stops in the Montello and Campello neighborhoods, as well as in the city center, providing service to points south and South Station in Boston north of the city.

Brockton was named one of the 100 Best Communities for Young People in the United States in 2005, 2008, 2010, and 2011. This prestigious award is given out by America's Promise Alliance in recognition of those communities that are taking action to reduce dropout rates and provide supportive services to youth. Despite the challenges it has had over the years, Brockton has made the success of its youth a high priority and was honored for its continued commitment to education, mentoring and volunteerism. Through the collaborative efforts of the Plymouth County District Attorney's Office, the Mayor's Office, the Superintendent and Police Department, along with area nonprofits and parents, the community has flourished with a host of resources for its young people.

Brockton is home to the Brockton Symphony Orchestra, a community orchestra founded in 1948. The orchestra performs five or six concerts per season at local venues such as Brockton's West Middle School Auditorium and the Oliver Ames Auditorium in the neighboring town of Easton. The orchestra comprises 65 musicians from the greater Brockton area and its musical director since 2007 is James Orent, a guest conductor of the Boston Symphony Orchestra and Boston Pops. 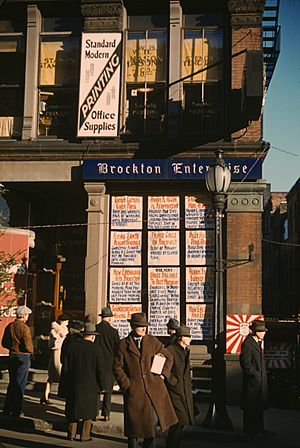 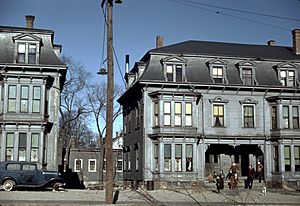 Children in the tenement district, December 1940, photo by Jack Delano 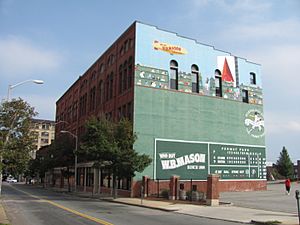 There is a central police station on Commercial Street, six fire stations, and three post offices (the main building, plus branches in Montello and Campello). The city supports three buildings within the Brockton Public Library system. The main library is a Carnegie building and is located at 304 Main Street, and there are two branch libraries.

All content from Kiddle encyclopedia articles (including the article images and facts) can be freely used under Attribution-ShareAlike license, unless stated otherwise. Cite this article:
Brockton, Massachusetts Facts for Kids. Kiddle Encyclopedia.