Kids Encyclopedia Facts
This page is about the city of Whangarei. For the electoral district with the same name, see Whangarei (New Zealand electorate).

Whangarei ( alt.) is the northernmost city in New Zealand and the regional capital of Northland Region. It is part of the Whangarei District, a local body created in 1989 to administer both the city proper and its hinterland from the former Whangarei City, Whangarei County and Hikurangi Town councils. The city population was estimated to be 56,400 at the June 2016, up from 47,000 in 2001. The wider Whangarei area had an estimated population of 85,900 in 2015.

The Whangarei urban area is spread throughout the valleys of the surrounding area and has several suburbs: Kamo, Springs Flat, Tikipunga, Three Mile Bush, Otangarei, Mairtown, Regent, Kensington, and Whau Valley lie to the north of the city. South and west of the city centre are Morningside, Raumanga, Maunu, Horahora, Woodhill, and the Avenues, and to the east are Riverside, Sherwood Rise, Onerahi, and Parihaka.

The Māori iwi Ngāpuhi occupied Whangarei from the early 19th century, and the Te Parawhau hapū lived at the head of the harbour. Captain James Cook and the crew of the Endeavour were the first Europeans to contemplate the Whangarei Harbour entrance. On 15 November 1769 they caught about one hundred fish there which they classified as "bream" (probably snapper) prompting Cook to name the area Bream Bay.

In the 1820s the area was repeatedly attacked by Waikato and Ngāti Paoa raiders during the Musket Wars. The first European settler was William Carruth, a Scotsman and trader who arrived in 1839 and was joined, six years later, by Gilbert Mair and his family. For the most part, relations between the settlers and local Māori were friendly, but in February 1842, all settler farms were plundered in revenge for transgressions of tapu. In April 1845, during the Flagstaff War, all settlers fled from Whangarei. Most of the original settlers never returned, but by the mid-1850s there were a number of farmers and orchardists in the area. From 1855, a small town developed, driven by the kauri gum trade. Today's 'Town Basin' on the Hātea River was the original port and early exports included kauri gum and native timber followed later by coal from Whau Valley, Kamo, and Hikurangi. Coal from the Kiripaka field was exported via the Ngunguru River. By 1864, the nucleus of the present city was established.

Fire bricks made from fire clay deposits near the Kamo mines supported a brick works over several decades. Good quality limestone was quarried at Hikurangi, Portland, and Limestone Island, and initially sold as agricultural lime and later combined with local coal to produce Portland cement at the settlement of Portland on the south side of the harbour. Local limestone is still used in cement manufacture but the coal is now imported from the West Coast of the South Island.

Whangarei was the most urbanised area in Northland towards the end of the 19th century, but grew slowly in the 20th century. The district slowly exhausted most of its natural resources but was sustained by agriculture, especially dairying. Shipping was the main transport link until the North Auckland railway line reached the town in 1925, and the road from Auckland was not suitable for travel in poor weather until 1934. These terrestrial travel routes forced a rapid decline in coastal shipping but stimulated Whangarei to become the service centre for Northland. The population was 14,000 in 1945, but grew rapidly in the 1960s, incorporating Kamo and other outlying areas. In 1964, Whangarei was declared a city. Its population the following year was 31,000.

The second half of the twentieth century brought the establishment and expansion of the oil refinery at Marsden Point on Bream Bay, the adjacent development of timber processing and the establishment of Northland Port, which is mainly focused on timber exporting.

A container port could follow, linked by rail to Auckland. The extensive flat undeveloped land around Northport is a suggested solution to excess population growth in Auckland and the associated lack of industrial land.

Panorama of Whangarei from Parihaka 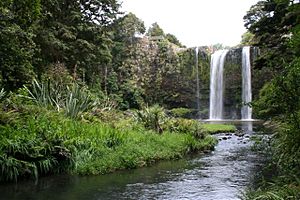 Mt Parihaka is a volcanic dome rising 241 m to the northeast of the city centre. It is about 20 million years old, and part of the Harbour Fault which also includes Parakiore near Kamo, and Hikurangi near the town of the same name. The dome is surrounded by the Parihaka Scenic Reserve. There is road access to the summit of Parihaka and walking tracks through the reserve.

The dome is frequently called Mount Parahaki, but the original Māori spelling of Parihaka was confirmed by the government in 2005.

The Hātea River flows south through the city and empties into Whangarei Harbour. The river has a spectacular 26 m waterfall in Tikipunga, 6 km north of the city.

Matakohe, or Limestone Island, lies in the harbour close to the city. Owned by Whangarei District, it is subject to ecological island restoration by the Friends of Matakohe/Limestone Island Society.

Whangarei has a oceanic climate (Köppen Cfb). Climate in this area has mild differences between highs and lows. Summer days occasionally exceed 30 °C, and there is plentiful rainfall spread relatively evenly throughout the year. Using the Trewartha classification Whangarei is firmly a maritime subtropical climate due to its absence of winter cold.

Whangarei is roughly the antipodal point of Tangier, Morocco.

Highway 1 from Auckland to Cape Reinga passes through Whangarei.

Highway 14 from Dargaville connects to Highway 1 in Whangarei.

Whangarei is connected to Auckland by rail. The line carries freight only; public passenger transport is by long-distance bus.

Whangarei Airport is located 7.4 kilometres (4.6 mi) southeast of the city centre, in the suburb of Onerahi.

In July 2013 a second road crossing of the Hatea River was opened, in the form of a bascule bridge.

The Whangarei Art Museum is located in the Town Basin. There are also artisan markets held at the nearby Canopy Bridge.

The Prosper Northland Trust is currently raising funds to build the Hundertwasser Wairau Art Centre on the former Northland Harbour Board building.

The Quarry Arts Centre is located on the edge of the Western Hills in the Avenues.

All content from Kiddle encyclopedia articles (including the article images and facts) can be freely used under Attribution-ShareAlike license, unless stated otherwise. Cite this article:
Whangarei Facts for Kids. Kiddle Encyclopedia.