Wickliffe is a home rule-class city in Ballard County, Kentucky, United States. The population was 688 at the 2010 census. It is the county seat of Ballard County.

Wickliffe is part of the Paducah, KY-IL Micropolitan Statistical Area.

There were 327 households, out of which 25.4% had children under the age of 18 living with them, 51.1% were married couples living together, 10.7% had a female householder with no husband present, and 33.9% were non-families. 30.0% of all households were made up of individuals, and 15.9% had someone living alone who was 65 years of age or older. The average household size was 2.25 and the average family size was 2.74. 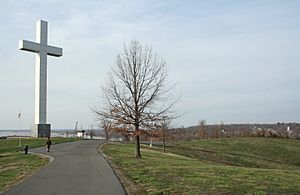 Cross at the Confluence City Park

The city of Wickliffe is the site of a Mississippian culture village now known only as Wickliffe Mounds. The village was occupied from around 1100-1300 AD. Today, Wickliffe Mounds is a state historic site and home to a research center and museum.

In 1780 during the Revolutionary War, General George Rogers Clark established Fort Jefferson on a hill overlooking the Mississippi River one mile south of present-day Wickliffe. The fort was intended to protect what was then the western boundary of the infant United States from raids by the British Army and Native Americans. It was abandoned in 1781 after a siege by the Chickasaw.

The site later served as a Union Army post during the Civil War. General Ulysses S. Grant directed a demonstration against the Confederate-held position at Columbus, Kentucky, in January 1862. Troops from the post joined in capturing Fort Henry in February 1862. It served as a Union supply post for operations in the western theater of the war.

Wickliffe has a public library, the Ballard-Carlisle County Public Library.

All content from Kiddle encyclopedia articles (including the article images and facts) can be freely used under Attribution-ShareAlike license, unless stated otherwise. Cite this article:
Wickliffe, Kentucky Facts for Kids. Kiddle Encyclopedia.