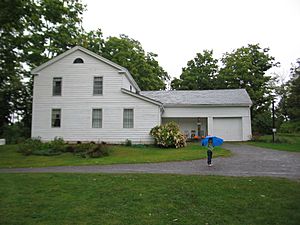 William Miller (February 15, 1782 – December 20, 1849) was an American Baptist preacher who is credited with beginning the mid-19th-century North American religious movement known as Millerism. After his proclamation of the Second Coming did not occur as expected in the 1840s, new heirs of his message emerged, including the Advent Christians (1860), the Seventh-day Adventists (1863) and other Adventist movements.

All content from Kiddle encyclopedia articles (including the article images and facts) can be freely used under Attribution-ShareAlike license, unless stated otherwise. Cite this article:
William Miller (preacher) Facts for Kids. Kiddle Encyclopedia.