Kids Encyclopedia Facts
Not to be confused with Williamson, West Virginia.

Williamstown is a city in Wood County, West Virginia, United States, along the Ohio River. It is part of the Parkersburg-Marietta-Vienna metropolitan area. The population was 2,997 at the 2020 census. The now closed Fenton Art Glass Company was located in the city.

Williamstown was named for Isaac Williams (1737-1820), who settled here in 1787. Williams had served under General Braddock (1755) as a ranger and spy and under Governor Dunmore (1774) fighting against the Shawnee. His home was on 400 acres on the Ohio River opposite the mouth of the Muskingum River, site of Marietta, Ohio, which was founded about a year after he arrived. Other local namesakes include Williams Creek and Williams District. The settlement was known as "Williamsport" to Ohio River travelers until 1822 when the present name was formalized.

There were 1,254 households, of which 30.0% had children under the age of 18 living with them, 53.7% were married couples living together, 9.3% had a female householder with no husband present, 4.6% had a male householder with no wife present, and 32.4% were non-families. 29.6% of all households were made up of individuals, and 14.2% had someone living alone who was 65 years of age or older. The average household size was 2.32 and the average family size was 2.84. 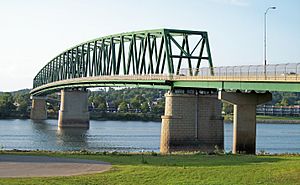 Since 1976, the Ohio River Sternwheel Festival [1] has been a major event on both sides of the Ohio River, in the towns of Williamstown and Marietta, Ohio. The celebration was created around the races of the sternwheelers (also known as the paddle steamer) that the Mid-Ohio Valley is known for, and today there are pageants, live music, food and a grand fireworks display. The event brings many local community members back to the area around the Labor Day weekend in the month of September.

The start of the Williamstown Fireman's Ice Cream Social was in 1944. This is also a form of homecoming for many local citizens. Many come home to gather for the hot dogs, donated cakes and other desserts from community members, ice cream and popcorn. It is also a time where many Williamstown High School alumni will hold and center their reunion events around the Friday night in July. The firemen put the event on to bring the community together and over a hundred gallons of ice cream each year [2]. The Fire Company of Williamstown hold the social in Tomlinson Park as a fundraiser for the volunteer organization. The money brought in is needed for updates on equipment and training. They annually raise between $7,000-$8,000. However, most of the general sum of money comes purely from donations given and not the sale of food.

The climate in this area is characterized by relatively high temperatures and evenly distributed precipitation throughout the year. According to the Köppen Climate Classification system, Williamstown has a Humid continental climate, abbreviated "Cfa" on climate maps.

Founded in 1905 by brothers Frank L. and John W. Fenton, the Fenton Art Glass Company is the largest manufacturer of hand made glass in the United States. The firm is now led by third- and fourth-generation Fenton family members.

After officials of Fenton Art Glass announced the fifth generation family company would shut down the 100-year-old factory at the end of 2007, thousands of loyal Fenton customers reacted with an outpouring of orders, selling out the QVC show that was to be its last in just minutes instead of the scheduled 2-hour show. Fenton is now open and working to stay open; tours are run daily through the gift shop and orders are placed online, on QVC and via its decades-old catalog. Fenton Art Glass Company has officially stopped making glass.

As of May 24, 2012 completion the sale of selected assets as scheduled. This included the sale of the name and logo, the formulas for the glass, molds and other materials that were used by the company. However, today the company now makes handcrafted glass jewelry; including beads and Teardrop earrings. The jewelry is made in many of the classic Fenton colors and styles popular with collectors. [3]

All content from Kiddle encyclopedia articles (including the article images and facts) can be freely used under Attribution-ShareAlike license, unless stated otherwise. Cite this article:
Williamstown, West Virginia Facts for Kids. Kiddle Encyclopedia.