Kids Encyclopedia Facts
Not to be confused with Williamstown, West Virginia.

Williamson is the site of a large rail yard built by the former Norfolk and Western Railroad (now Norfolk Southern Railway), which was built to service the many coal mines of the region. The city is protected by a floodwall, completed by the U.S. Army Corps of Engineers in 1991 in response to devastating floods along the Tug Fork River in 1977 and again in 1984. The wall incorporates floodgates along major access points which, when locked, form a solid barrier against floodwaters. There have only been two uses of the gates thus far: the first occurring in 2002 during a major flood in the region, and the second occurring in 2003, when only two lower lying gates were closed in anticipation of rising water levels. 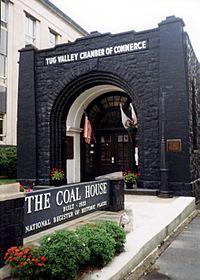 Aerial view of Williamson, West Virginia, during construction of its current floodwall, completed in 1991. The Tug Fork river is the border between West Virginia and Kentucky; the highway on the left (US-119) is in Kentucky.

There were 1,524 households of which 22.0% had children under the age of 18 living with them, 36.4% were married couples living together, 14.3% had a female householder with no husband present, 4.1% had a male householder with no wife present, and 45.2% were non-families. 42.3% of all households were made up of individuals and 16.7% had someone living alone who was 65 years of age or older. The average household size was 2.04 and the average family size was 2.76.

There were 1,566 households out of which 24.1% had children under the age of 18 living with them, 39.0% were married couples living together, 15.3% had a female householder with no husband present, and 42.3% were non-families. 40.3% of all households were made up of individuals and 18.0% had someone living alone who was 65 years of age or older. The average household size was 2.11 and the average family size was 2.85. 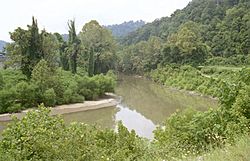 The Tug Fork River at Williamson

The climate in this area is characterized by hot, humid summers and generally mild to cool winters. According to the Köppen Climate Classification system, Williamson has a humid subtropical climate, abbreviated "Cfa" on climate maps. 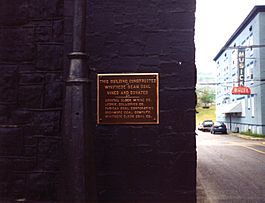 Brass plaque on The Coal House in Williamson, West Virginia

The Coal House, whose walls are constructed from 65 tons of bituminous coal from the nearby Winifrede Seam, serves as the headquarters of the Tug Valley Chamber of Commerce. It was built in 1933 and is on the National Register of Historic Places. In October 2010, the interior of the Coal House was destroyed in a fire. The Coal House interior has since been restored while preserving the historical integrity of the building.

The Williamson Field House is a 6,000 capacity facility which was once home to the Williamson High School Boys' basketball team.

Each year, in June, as many as 500 distance runners from around the United States and several foreign countries descend upon Williamson for the Hatfield-McCoy Marathon. Beginning in South Williamson, Kentucky, the race ends in the midst of the annual Hatfield-McCoy Reunion Festival in downtown Williamson.

All content from Kiddle encyclopedia articles (including the article images and facts) can be freely used under Attribution-ShareAlike license, unless stated otherwise. Cite this article:
Williamson, West Virginia Facts for Kids. Kiddle Encyclopedia.