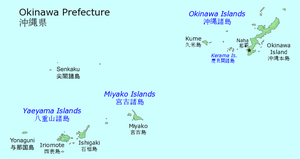 Location of the Yaeyama Islands in Okinawa Prefecture

The Yaeyama Islands (八重山諸島 Yaeyama-shotō, also 八重山列島 Yaeyama-rettō, Yaeyama: Yaima Okinawan: Eema) are an archipelago or group of islands in the southwest of Okinawa Prefecture, Japan. They cover 591.46 square kilometres (228.36 sq mi). The islands are southwest of the Miyako Islands. They are part of the Ryukyu Islands archipelago. The Yaeyama Islands are the remotest part of Japan from the main islands. They contain Japan's most southern (Hateruma) and most western (Yonaguni) inhabited islands. The city of Ishigaki serves as the political, cultural, and economic head of the Yaeyama Islands.

The Yaeyama Islands have numerous species of subtropical plants and mangrove forests. The islands produce sugarcane and pineapples. Coral reefs around the islands are ideal habitats for dolphins, sea turtles, and larger fish such as Manta rays and Whale sharks. Before being wiped out by humans, whales and Dugongs were common. Yaeyama once had the largest population of Dugongs in the Ryukyu Islands. On Aragusuku Island, there is a Utaki which has laid to rest Dugongs with their skulls. Non-residents are not allowed to enter unless they get an okay from the locals. It is said that any aliens without permission will be driven out by force. 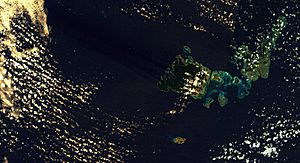 The islands form the southern part of the volcanic Ryukyu Islands. The administrative division of Yaeyama District covers all of the Yaeyama Islands, except Ishigaki and the disputed Senkaku Islands.

The native people of the Yaeyama Islands are the Yaeyama and Yonaguni peoples, both of whom are subgroups of a larger Ryukyuan ethnicity.

The Yaeyama language is the native language of the entire Yaeyama island chain, with the exception of Yonaguni, which is home to the Yonaguni language instead.

Because Japan suppressed both the Yaeyama and Yonaguni languages in the past, they are endangered, meaning there aren’t a lot of speakers left. The younger generation mainly speaks Japanese instead.

14 July: Mushaama Festival. On Hateruma Island, this harvest festival is celebrated during Obon. It features a parade of the local fertility god Miruku and his children (the local children), shishi ("lion") dances, and staff dances.

The undersea Yonaguni monument is on the island of Yonaguni. The Yaeyama Islands are home to the production of traditional Yaeyaman textiles.

All content from Kiddle encyclopedia articles (including the article images and facts) can be freely used under Attribution-ShareAlike license, unless stated otherwise. Cite this article:
Yaeyama Islands Facts for Kids. Kiddle Encyclopedia.