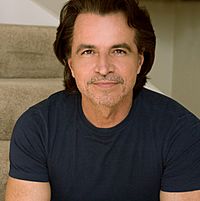 At least sixteen of Yanni's albums have peaked at No. 1 in Billboard's "Top New Age Album" category, and two albums (Dare to Dream and In My Time) received Grammy Award nominations. His career began in 1980.

All content from Kiddle encyclopedia articles (including the article images and facts) can be freely used under Attribution-ShareAlike license, unless stated otherwise. Cite this article:
Yanni Facts for Kids. Kiddle Encyclopedia.