The Yellow pond turtle (Mauremys mutica) is a medium-sized turtle which can grow up to 19.5 cm long. It belongs to the family Geoemydidae. It is a semi-aquatic species. This species of turtle has a wide yellow stripe starting from behind the eye and down the neck.

The yellow pond turtle is found in East Asia. The places it can be found includes central Vietnam, coastal provinces of south and central China. There are some other populations of the turtle that are separate from the rest of the species. These can be found in Taiwan, Hainan, Ryukyu Islands, and Japan. The Japanese populations are thought to come from Taiwan.

This species lives in ponds, creeks, swamps and marshes. It can be found in shallow, slow moving water. It is omnivorous. The main food for the turtle are insects, fish, tadpoles, leaves and seeds. The yellow pond turtle generally remains in or close to water during the day. It is usually more active at night. It usually goes onto land when it rains.

Mauremys mutica kami is one of the subspecies. It is currently found in the Ryukyu Islands. There are several hybrid Asian pond turtles species. They were first described as new species but later found out as hybrid species. Fujian pond turtles (Mauremys iversoni) are hybrid species mainly produced in Chinese turtle farms. They are produced when female yellow pond turtles and male golden coin turtles (Cuora trifasciata) mates.

Clemmys guangxiensis is a hybrid species that came from the mating of Mauremys mutica and the Fujian pond turtle.

The yellow pond turtle is threatened with extinction. The population in China eats the most amount of turtles in the world. This trading of turtles is the greatest threat to Asian turtles including M. mutica. The turtles are also used in traditional Chinese medicine. There are also turtles kept as pets but are later killed or abandoned. Water pollution can also cause some habitats of the turtle be to gone. The IUCN considers M. mutica an endangered species. It is listed in CITES Appendix II. 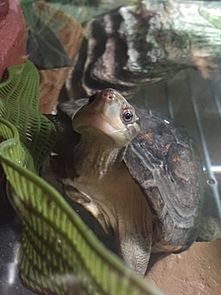 A yellow pond turtle (subspecies:Mauremys mutica) kept as pet in a terrarium.

All content from Kiddle encyclopedia articles (including the article images and facts) can be freely used under Attribution-ShareAlike license, unless stated otherwise. Cite this article:
Yellow pond turtle Facts for Kids. Kiddle Encyclopedia.