Yorkeys Knob is a coastal suburb of Cairns, in Cairns Region, Far North Queensland, Australia. It is approximately 13 kilometres (8.1 mi) north of the centre of Cairns, and is the third beach suburb after Machans Beach and Holloways Beach.

Yorkeys Knob got its name from George Lawson, a Yorkshire-born, Cairns-based beche-de-mer fisherman. On 10 June 1886 Yorkey Lawson reported the loss of a man and his wife from Green Island. They had left to visit the wreck of the Upolu, intending to return the same day. Lawson made a search for them, but was unable to find any trace of them, not even an accident. The pilot cutter was sent to search for the couple.

Lawson built a homestead adjoining the Mount Buchan estate near what is now Yorkeys Knob. During the off-fishing season he and his sons farmed pumpkins, sweet potatoes and paddy melons, but not successfully. Whatever the bandicots and pigs didn't eat, the crocodiles did. Lawson used the mangroves near his homestead for the firewood and water needed for his beche-de-mer smoking station on Green Island.

Locals are attached to the name and successfully prevented a developer from advertising a development as being at "Yorkeys Beach".

Yorkeys Knob has a supermarket, post office, bottleshop, bakery, and a variety of other shops. A newsagent and a small store are on the beachfront, near the main swimming area.

Yorkeys Knob has three restaurants. One at the Half Moon Bay marina has an over-the-water deck looking across Half Moon Bay to Double Island and Haycock Island (also known as Scout's Hat due to its shape).

The swimming area is at the northern end of Sims Esplanade. It is patrolled for 6 months of the year by Surf Lifesaving Queensland, and has a stinger net to protect swimmers from box jellyfish (Chironex fleckeri). Trust the lifesavers and swim between the flags; there have been drownings around the rocks a short distance away. There are barbecue and picnic facilities, plus public toilets and showers. The beach is lined with she-oak casuarinas, beach almonds, ballnuts and coconut palms. At its southern end the beach meets Thomatis Creek, which lies between Yorkeys Knob and Holloways Beach.

The beach is a popular for kitesurfing and windsurfing. 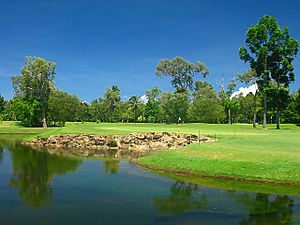 Half Moon Bay Golf Club is located at the western end of Wattle Street, and is a short but challenging layout which features a number of water hazards. It is 5,129 metres long and par is 70. Most of the course is sand-based, and it dries rapidly after heavy rains. A 9-hole course is generally open even if all the other Cairns courses are closed due to flooding, although cyclones can force its closure for a couple of days.

The golf club is a very good bird-watching location, with masked lapwings, bush stone-curlews, a range of kingfishers, rainbow lorikeets and sea eagles fairly easy to find. Between the 12th and 13th holes lies Ray Howarth Park, which is home to a huge colony of flying foxes, which you can see heading out searching for food in the early evenings. During the day they hang upside down from the mangrove's trees, and make an almighty din. When the melaleucas are in flower you will find them gorging on nectar in the trees at the northern end of Sim's Esplanade.

A small bush track near the State school offers a chance to see a variety of birdlife, monitor lizards, and lots of skinks. Along the beach you will find pied oyster catchers, bush stone-curlews, ghost fiddler crabs and sand-bubbler crabs. At the rocks at the end of the beach keep an eye out of the beach tree skink scampering around the rocks looking for lunch, while you also watching for a pod of bottlenose dolphins that sometimes visit the small bay on the northern side of the groyne.

Yorkeys Knob is serviced by Sunbus seven days a week. Yorkeys Knob Sunbus Service The normal service, the 1C, runs hourly Monday to Saturday, and every second hour on Sundays. This service also runs to the Smithfield shopping centre, the nearest large shopping complex. A direct service, the 1D, is available during the peak periods, travelling to Cairns in the mornings and back to Yorkeys in the late afternoon.

Yorkeys Knob has a number of heritage-listed sites, including:

All content from Kiddle encyclopedia articles (including the article images and facts) can be freely used under Attribution-ShareAlike license, unless stated otherwise. Cite this article:
Yorkeys Knob, Queensland Facts for Kids. Kiddle Encyclopedia.