Zillah is a city in Yakima County, Washington, United States, with a population of 2,964 as of the 2010 census.

Zillah was founded in 1891 following the completion of the Sunnyside Canal project, an irrigation scheme delivering water from the Yakima River to the arid lower Yakima Valley. Walter Granger, superintendent of the canal company, chose the town site in 1892. The town was named for Miss Zillah Oakes, daughter of Thomas Fletcher Oakes, who as president of the Northern Pacific Railway had backed the building of the canal. The town was named after Miss Zillah because she would scream and cry on the way to the new town, while on the trip her father promised to name the town after her if she would stop. Granger housed the headquarters of the Washington Irrigation Company in Zillah, giving it economical advantages for a time. He also made his residency in Zillah becoming its mayor after retiring from the irrigation company. Zillah was officially incorporated on January 5, 1911.

Zillah is located on Interstate 82 about 15 miles (24 km) southeast of Yakima.

According to the United States Census Bureau, the city has a total area of 1.78 square miles (4.61 km2), all of it land.

There were 1,033 households, of which 43.4% had children under the age of 18 living with them, 53.0% were married couples living together, 13.1% had a female householder with no husband present, 5.6% had a male householder with no wife present, and 28.3% were non-families. 23.9% of all households were made up of individuals, and 8.9% had someone living alone who was 65 years of age or older. The average household size was 2.87 and the average family size was 3.40. 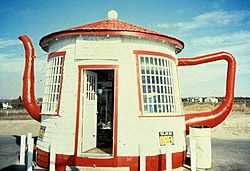 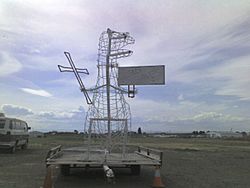 Godzilla model found outside the Church of God Zillah

All content from Kiddle encyclopedia articles (including the article images and facts) can be freely used under Attribution-ShareAlike license, unless stated otherwise. Cite this article:
Zillah, Washington Facts for Kids. Kiddle Encyclopedia.