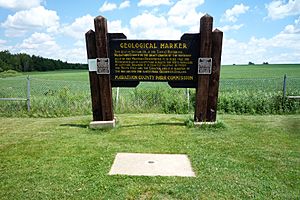 The original marker for the 45×90 point in North America; the sign was later amended to explain that the real location is actually approximately 324 m (1,063 ft) behind and to the left of the marker on the ground. 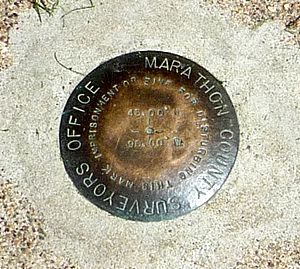 Close up of the incorrectly placed marker in Marathon County, Wisconsin, United States

The 45×90 points are the four points on Earth which are halfway between the geographical poles, the equator, the Prime Meridian, and the 180th meridian.

The point has become something of a pop culture phenomenon thanks to Gesicki's Tavern in the tiny cluster of establishments in Poniatowski. They sold 45×90 T-shirts and registered visitors as members of the "45×90 Club". Since 2006, the Wausau/Central Wisconsin Convention & Visitors Bureau has been the holder of the official "45×90 Club" registration book. The book is on loan from the family. On becoming a member of the club, the Bureau gives a commemorative coin.

The only other 45×90 point located on land is 45°0′0″N 90°0′0″E﻿ / ﻿45.00000°N 90.00000°E﻿ / 45.00000; 90.00000, which is at an elevation of 1,009 m (3,311 ft) above sea level. This point is located in a desolate region of the Xinjiang Uyghur Autonomous Region of China, near the Mongolian border, approximately 240 km (150 mi) northeast of Ürümqi. Administratively, it is on the border of Qitai and Qinggil Counties. Greg Michaels, an American, and Ru Rong Zhao, a taxi driver from the closest town of Qitai, itself 110 km to the south-southwest, visited this point on April 13, 2004 and documented the visit on the Degree Confluence Project. Their visit found no monument or any physical recognition of the status and documented that the nearest community to the site documented on maps, Jiangjunmiao, had long since been abandoned. 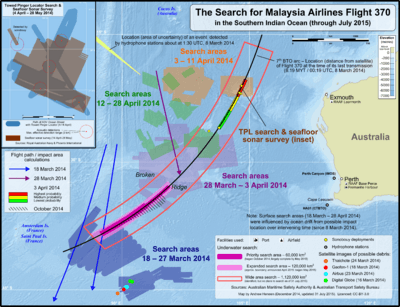 The search for Malaysia Airlines Flight 370 was near the coordinate 45°S, 90°E. The coordinate is closest to the red dot labeled as Gaofen 1 at the bottom, halfway between the center and left side of the image.

In March 2014, the point was in one of a few strips in a search for the missing Malaysia Airlines Flight 370, after potential debris were spotted by satellite about there.

The southern Indian Ocean location and the point in Wisconsin are antipodes of each other.

The southern Pacific Ocean location and the point in China are antipodes of each other.

All content from Kiddle encyclopedia articles (including the article images and facts) can be freely used under Attribution-ShareAlike license, unless stated otherwise. Cite this article:
45×90 points Facts for Kids. Kiddle Encyclopedia.