The Aconcagua River is a river that flows from east to west through the Valparaíso region in north central Chile and flows into the Pacific Ocean 20 km (12 mi) north of Valparaíso.

Although it has the same name, the Aconcagua river does not starts in the slopes of Aconcagua, which is in Argentina about 20 km (12 mi) from the beginning of the river, in Chilean territory. 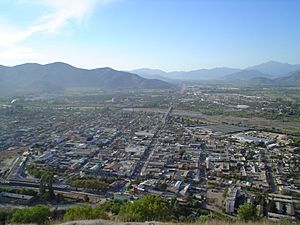 The Aconcagua river through La Calera

The Aconcagua river starts on the Andes at an elevation of about 1,430 m (4,692 ft), at the confluence of two rivers:

The river keeps flowing to the west, running through the cities of La Calera and Quillota, in the Quillota province. Finally, the Aconcagua river flows in the Pacific Ocean at the city of Concón, in the Valparaíso province.

The main tributaries of the Aconcagua river are:

All content from Kiddle encyclopedia articles (including the article images and facts) can be freely used under Attribution-ShareAlike license, unless stated otherwise. Cite this article:
Aconcagua River Facts for Kids. Kiddle Encyclopedia.