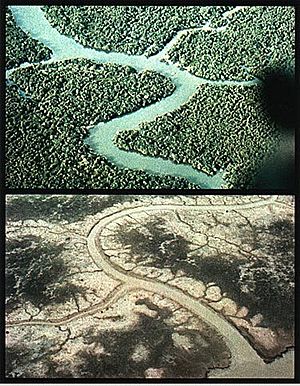 Mangrove forests, like the top one east of Saigon, were often destroyed by herbicides. it may have caused health problems in soldiers and civilians

Agent Orange is a herbicide and defoliant chemical, one of the "tactical use" Rainbow Herbicides. It is widely known for its use by the U.S. military as part of its herbicidal warfare program, Operation Ranch Hand, during the Vietnam War from 1961 to 1971.

It is a defoliant that destroys forests. It was used by the United States military so their enemies had no place to hide.

It is a defoliant that destroys forests. It was used by the United States military so their enemies had no place to hide. The problem with Agent Orange is that when it is released, some dioxins are also generated. Dioxins stay a long time in the environment. They are very toxic, and cause genetic modifications and cancer.

Use in Vietnam War 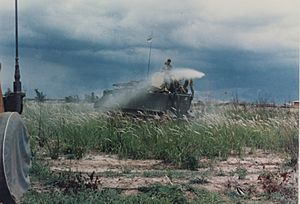 Up to 4 million people in Vietnam were exposed to the defoliant, with around 1 million now suffering serious health issues. The chemical is capable of damaging genes, resulting in deformities among offspring of exposed victims. The U.S. government has documented higher cases of leukemia, Hodgkin's lymphoma, as well as other various kinds of cancer in exposed veterans.

The aftermath of the use of Agent Orange in Vietnam resulted in massive legal consequences. The United Nations ratified United Nations General Assembly Resolution 31/72 and the Environmental Modification Convention. Lawsuits filed on behalf of veterans as well as Vietnamese veterans sought compensation for damages.

Agent Orange was to a lesser extent used outside Vietnam. Some countries, such as Canada, saw testing, while other countries, such as Brazil, used the herbicide to clear out sections of land for agriculture. Land in Laos and Cambodia was sprayed with Agent Orange because forests on the border with Vietnam were used by the Vietcong. 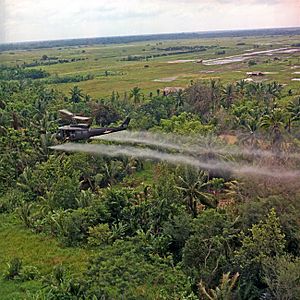 In February 2012, Monsanto agreed to settle a case covering Dioxin contamination around a plant in Nitro, West Virginia, that had manufactured Agent Orange. Monsanto agreed to pay up to $9 million for cleanup of affected homes, $84 million for medical monitoring of people affected, and the community's legal fees.

On 9 August 2012, the United States and Vietnam began a cooperative cleaning up of the toxic chemical on part of Danang International Airport, marking the first time Washington has been involved in cleaning up Agent Orange in Vietnam. Danang was the primary storage site of the chemical.

Two other cleanup sites the United States and Vietnam are looking at is Biên Hòa, in the southern province of Đồng Nai—a "hotspot" for dioxin—and Phù Cát airport in the central province of Bình Định, says U.S. Ambassador to Vietnam David Shear. According to the Vietnamese newspaper Nhân Dân, the U.S. government provided $41 million to the project, which will reduce the contamination level in 73,000 cubic meters of soil by late 2016.

The Seabee's Naval Construction Battalion Center at Gulfport, Mississippi was the largest storage site in the United States for agent orange, it was 30 odd acres in size and was still being cleaned up in 2013.

In 2016, the EPA laid out its plan for cleaning up an 8-mile stretch of the Passaic River in New Jersey, with an estimated cost of $1.4 billion. The contaminants reached to Newark Bay and other waterways, according to the Environmental Protection Agency, which has designated the area a Superfund site.

Due to the fact that destruction requires high temperatures (over 1000 °C), the destruction process is energy intensive.

All content from Kiddle encyclopedia articles (including the article images and facts) can be freely used under Attribution-ShareAlike license, unless stated otherwise. Cite this article:
Agent Orange Facts for Kids. Kiddle Encyclopedia.