The Agua Caliente Band of Cahuilla Indians of the Agua Caliente Indian Reservation is a federally recognized tribe of the Cahuilla, located in Riverside County, California. 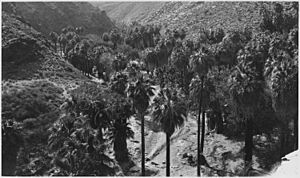 The Agua Caliente Indian Reservation was founded on May 15,1876 through Executive Order and signed by President Ulysses S. Grant and occupies 31,610 acres (12,790 ha). On 1877 and 1907 the Reservation was extended to over 32,000 acres of land. Since 6,700 acres (2,700 ha) of the reservation are within Palm Springs city limits, the tribe is the city's largest collective landowner. The tribe owns Indian Canyons, located southwest of Palm Springs. The canyons are listed on the National Register of Historic Places. They also own land in the Santa Rosa and San Jacinto Mountains National Monument.

Agua Caliente is one of three reservations where speakers of the "Pass" dialect of the Cahuilla were located, the other two being the Morongo Indian Reservation and Augustine Indian Reservation. Pass Cahuilla is a dialect of Cahuilla found within the Cupan branch of Takic languages, part of the Uto-Aztecan language family. Though revitalization efforts are underway, all dialects of Cahuilla are technically considered to be extinct as they are no longer spoken at home, and children are no longer learning them as a primary language. The last native speaker of Pass Cahuilla died in 2008.

Tribal Family Services was established in 2003 to support social and educational programs for tribal members. Other services include cultural preservation, child development, and scholarships.

The Jane Augustine Patencio Cemetery provides burial services. (Palm Springs artist Carl Eytel is one of the few non-Indians buried in the cemetery.)

The Agua Caliente Cultural Museum in Palm Springs was founded by the tribe in 1991. It houses permanent collections and archives, a research library, and changing exhibits, as well as hosting an annual film festival.

The tribe also maintains two golf courses in Indian Canyon which are open to the public.

All content from Kiddle encyclopedia articles (including the article images and facts) can be freely used under Attribution-ShareAlike license, unless stated otherwise. Cite this article:
Agua Caliente Band of Cahuilla Indians Facts for Kids. Kiddle Encyclopedia.