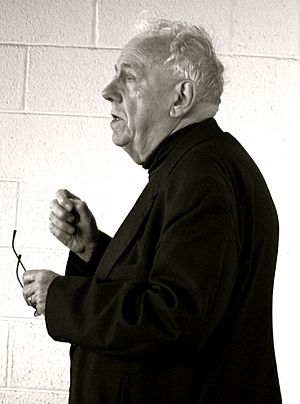 Alasdair Chalmers MacIntyre (born 1929) is a Scottish philosopher. He is best known for work on moral and political philosophy. He is also known for his work in history of philosophy and theology. He is Senior Research Fellow at the Centre for Contemporary Aristotelian Studies in Ethics and Politics (CASEP) at London Metropolitan University, and an Emeritus Professor of Philosophy at the University of Notre Dame.

All content from Kiddle encyclopedia articles (including the article images and facts) can be freely used under Attribution-ShareAlike license, unless stated otherwise. Cite this article:
Alasdair MacIntyre Facts for Kids. Kiddle Encyclopedia.