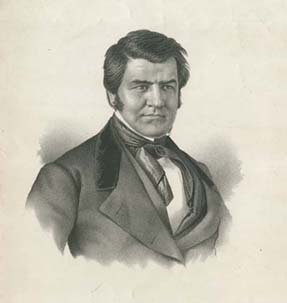 Albert Newsam made this self-portrait of himself. He made it near the date 1850, but the exact date is not known.

Albert Newsam was born in the city of Steubenville in the state of Ohio in the United States. He was born deaf and mute. He was also an orphan. Newsam was making art when he was a little boy. When he was still a little boy, he met a man named William P. Davis. Davis acted like he was also deaf and mute, but he wasn't. He took Newsam to the city of Philadelphia in Pennsylvania and forced Newsam to make art and Davis would sell it and make money off of it. In 1820, Newsam was saved from being with Davis and went to school at the Pennsylvania School for the Deaf.

Job as an artist

In the year 1827, Newsam started to make art as an apprentice to a printmaker named Cephas G. Childs. Newsam had a lot of artists who taught him when he worked for Childs. One of the artists was George Catlin. Newsam started making art all the time as an artist in 1829. His pictures were published and sold for money. Childs retired and another man named Peter S. Duvall became owner of the company. Newsam worked for him and became the main artist at the company.

Newsam painted and drew pictures of politicians, preachers, and rich people. He also made pictures of landscapes, medical illustrations, and sheet music.

Newsam started to lose his eyesight in the year 1857. In 1859, he had a stroke, which made him stop making art. He had to move to a place called the Living Home for the Sick and Well in the state of Delaware. Since he could not sell art anymore, his friends paid for him to move to the home. He died there in the year 1864.

His artwork is owned by the Pennsylvania Academy of the Fine Arts and The Library Company of Philadelphia.

All content from Kiddle encyclopedia articles (including the article images and facts) can be freely used under Attribution-ShareAlike license, unless stated otherwise. Cite this article:
Albert Newsam Facts for Kids. Kiddle Encyclopedia.