All Hallows-by-the-Tower facts for kids

All Hallows-by-the-Tower, at one time dedicated jointly to All Hallows (All Saints) and the Virgin Mary and sometimes known as All Hallows Barking, is an ancient Anglican church on Byward Street in the City of London, overlooking the Tower of London.

According to the church website and other sources it is "the oldest church in the City of London" and was founded in AD 675, although recent research has questioned these claims. The church survived the Great Fire of London in 1666, but was badly damaged during the Blitz in World War II. Following extensive reconstruction, it was rededicated in 1957. From 1922 until 1962 the vicar was the Reverend Philip T. B. "Tubby" Clayton, and the church is still the guild church of Toc H, the international Christian organisation that he founded. 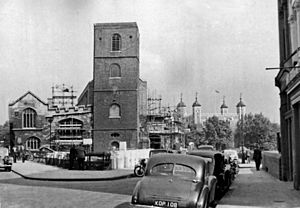 Reconstruction during 1955, after extensive damage in the Blitz.

The origin and early history of All Hallows-by-the-Tower church are obscure. At the time of the Dissolution of the Monasteries in 1539 the church belonged to Barking Abbey, a wealthy Benedictine nunnery in Barking, Essex, originally established in the 7th century. The association with Barking was a long one, and All Hallows church was already known as "Berkyncherche" in the 12th century. According to Domesday Book in 1086, Barking Abbey possessed "28 houses and half a church" in London: although the church is not named, it is usually identified with All Hallows.

The original Anglo-Saxon abbey of Barking was founded by Earconwald or Erkenwald, along with Chertsey Abbey, before he became Bishop of London in 675, and it has been claimed that the land on which All Hallows stands was granted to the abbey, under Abbess Ethelburga, Erkenwald's sister, at that time. A charter dated to 687, listing properties belonging to Barking Abbey, includes two pieces of land in or near London. One of these was simply described as "iuxta Lundoniam", near/next to London, the other as "supra vicum Lundoniae", that is, in "Lunden-wic", the Anglo-Saxon town that had grown up in the area of the Strand, a mile to the west of the old Roman city of Londinium; neither of these, though, accurately describes the location of All Hallows church, inside the wall of the Roman city on the eastern side.

In 1940, during World War II, the clearance after destruction caused by bombing revealed an archway built of reused Roman tiles and stonework, set in a surviving wall of the medieval church. The reuse of Roman building materials, and comparison with arches in the early Anglo-Saxon church at Brixworth, Northamptonshire, suggested that the All Hallows arch was very early in date, and that an original church could have been built as early as the 7th century. This seemed to confirm the belief that the church had been founded as a daughter church of Barking Abbey at about the same time as the abbey itself was established, although it is doubtful that the first construction on the site would have been in stone. It is more likely that the stone church, of which the arch is a remnant, superseded an earlier wooden building. Recent research, and archaeological evidence that Roman tiles and stone were being used in the construction of other London churches as late as the 11th century, suggest that the arch could have been constructed at any time between the 7th century and the arrival of the Normans. Fragments of three 11th-century stone crosses also found during archeological work in the 1930s and clearance works after the bombing, now displayed in the crypt, also date from this first church.

The church was expanded and rebuilt several times between the 11th and 15th centuries, with various elements of the Norman, 13th century and 15th century constructions still visible today. Its proximity to the Tower of London meant that it acquired royal connections, with Edward IV making one of its chapels a royal chantry and the victims of Tower executions being sent for temporary burial at All Hallows, Sir Thomas More being one of the most eminent of these. 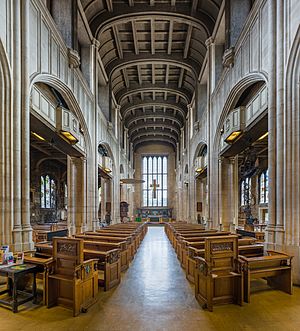 The church was badly damaged by an explosion in 1650 caused when some barrels of gunpowder being stored in a warehouse adjacent to the church exploded; its west tower and some 50 nearby houses were destroyed, and there were many fatalities. The tower was rebuilt in 1658, the only example of work carried out on a church during the Commonwealth era of 1649–1660. It only narrowly survived the Great Fire of London in 1666 and owes its survival to Admiral William Penn, father of William Penn of Pennsylvania fame, who had his men from a nearby naval yard blow up the surrounding buildings to create firebreaks. During the Great Fire, Samuel Pepys climbed the church's tower to watch the progress of the blaze and what he described as "the saddest sight of desolation".

Restored once more in the late 19th century, All Hallows was gutted by German bombers during the Blitz in World War II and required extensive reconstruction, and was rededicated in 1957.

The main-altar mural, a post-war work by Brian Thomas

Many portions of the old church survived the War and have been sympathetically restored. Its outer walls are 15th-century, with the Saxon arch doorway surviving from the original church. Many brasses remain in the interior. (The brass rubbing centre which used to be located at All Hallows is now closed). Three outstanding wooden statues of saints dating from the 15th and 16th centuries can also be found in the church, as too an exquisite Baptismal font cover which was carved in 1682 by Grinling Gibbons for £12, and which is regarded as one of the finest pieces of carving in London. The main-altar's reredos mural is a post-war work by Brian Thomas.

In 1999 the AOC Archaeology Group excavated the cemetery and made many significant discoveries.

The church has a museum in its crypt, containing portions of a Roman pavement which together with many artefacts was discovered many feet below the church in 1926/27. The exhibits focus on the history of the church and the City of London, and include Saxon and religious artefacts as well as the (17th century church plate. Also on display are the church's registers dating back to the 16th century, and notable entries include the baptism of William Penn, the marriage of John Quincy Adams (which is the only marriage of a U.S. president that occurred on foreign soil), and the burial of Archbishop William Laud. Laud remained buried in a vault in the chapel for over 20 years; his body was moved during the Restoration to St John's College, Oxford. The crypt also houses the church's chapels dedicated to St Francis (14th century) and St Clare (early 17th century) as well as the Columbarium, created in 1933.

The altar in the crypt is of plain stone from the castle of Richard I at Athlit in The Holy Land.

All Hallows-by-the-Tower has been the guild church of Toc H since 1922. The church was designated a Grade I listed building on 4 January 1950.

The church also has a Carillon which was brought back to working order in the 1970s by Philip Blewett, then a priest at the church, and Desmond Buckley over many weekends.

The Knollys Rose Ceremony, which held every year in June, starts at the church and processes to the Mansion House, where a single rose is presented to the Lord Mayor as a 'quit rent'. The parish's annual Beating Of The Bounds ceremony also includes a boat trip to the middle of the Thames to 'beat' the water that forms the southern boundary. 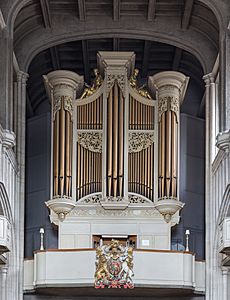 The earliest records of an organ in All Hallows is one by Anthony Duddyngton dating from 1521. This was presumably lost during the English Civil War.

All content from Kiddle encyclopedia articles (including the article images and facts) can be freely used under Attribution-ShareAlike license, unless stated otherwise. Cite this article:
All Hallows-by-the-Tower Facts for Kids. Kiddle Encyclopedia.