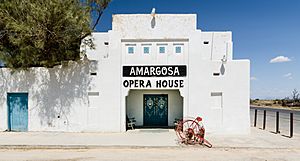 When Marta Becket rented and repaired Corkhill Hall in 1967, she changed the name to the Amargosa Opera House.

Amargosa Opera House and Hotel is a historic building and cultural center located in Death Valley Junction, in eastern Inyo County, California near Death Valley National Park. Resident artist Marta Becket staged dance and mime shows there from the late 1960s until her final show in February 2012. The Death Valley Junction Historic District is on the National Register of Historic Places and is owned by the nonprofit established by Becket for the preservation of the property.

The theater was part of a company town designed by architect Alexander Hamilton McCulloch and constructed in 1923–25 by the Pacific Coast Borax Company. The U-shaped complex of Spanish Colonial Revival architecture style adobe buildings included company offices, employees' headquarters, a dormitory and a 23-room hotel with a dining room, lobby and store. At the northeast end of the complex was a recreation hall used as a community center for dances, church services, movies, funerals and town meetings.

When the town of Amargosa was booming due to the Borax mining business, and its position at the terminus of the Tonopah and Tidewater Railroad, about 350 people lived in the town. The hotel served as a very nice place to stay for both company executives and visiting investors, who were met at the train with white-gloved valets after a long and hot train ride. In addition to the hotel rooms, the cafe and a restaurant within the hotel, other rooms were bunkhouses for workers, an infirmary, a general store and what is now the Opera House, which was mostly used for showing films. A large gas station and garage across from the cafe was the only location in the area for repairs of trucks hauling borax out of the mines, in addition to passenger car repairs. When the Tonopah and Tidewater Railroad ceased to be economical in 1942, the tracks were torn up completely and sent to Egypt, where the railroad was set up again to aid the Allies military effort in Egypt. Once the railroad stopped, the Opera House, Hotel and about 250 acres of land changed hands many times, until Marta Becket arrived on the scene.

Marta Becket rented the recreation hall in 1967, when it was known as Corkhill Hall; she began repairs, created the sets, and painted murals on the adobe walls. She renamed it the Amargosa, the original name of the former mining town. In 1970, journalists from National Geographic discovered Becket doing a performance at the Amargosa Opera House without an audience. Their profile and another in Life led to an international interest in Becket and her theater. She began performing to visitors from around the world, including such notables as Ray Bradbury and Red Skelton.

In 1974, Becket completed her murals and established the nonprofit Amargosa Opera House, Inc. to continue preservation of the property. Through the Trust for Public Land, the nonprofit bought the town of Death Valley Junction, which was listed in the National Register of Historic Places on December 10, 1981. In 1983, the Opera House bought 120 theater seats from the Boulder City Theater in Boulder City, Nevada to replace the worn garden chairs and the official National Register of Historic Places marker for Death Valley Junction was placed.

Jenna McClintock saw a performance when she was six years old and was inspired to start training in ballet. After a career with the Oakland Ballet, Jenna returned to thank Marta, and decided to stay and maintain the tradition. Jenna retired from the Amargosa Opera House in the spring of 2016.

The Amargosa Hotel is open year-round for visitors from all over the world. Beyond these maintained areas, the town of Death Valley Junction is almost a ghost town. There are no gas stations. The single restaurant, the Amargosa Cafe, was part of the Opera House and Hotel, and has recently re-opened with an Australian-American cook making very upscale, Australian-American fusion roadhouse/coffee shop meals, pastries and coffees from espresso to American drip. The interior of the Cafe is like a time capsule, like most of the Amargosa Hotel, with an old counter and circular counter chairs.

All content from Kiddle encyclopedia articles (including the article images and facts) can be freely used under Attribution-ShareAlike license, unless stated otherwise. Cite this article:
Amargosa Opera House and Hotel Facts for Kids. Kiddle Encyclopedia.