The American bushtit (Psaltriparus minimus) is the only species in the family Aegithalidae found in the New World, and the only member of the genus Psaltriparus. In North America, it is referred to simply as "bushtit". 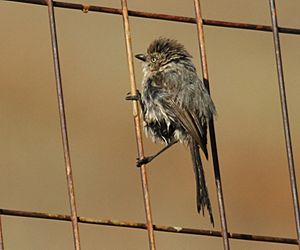 The American bushtit inhabits mixed open woodlands, often containing oaks and a scrubby chaparral understory; it also inhabits parks and gardens. It is a year-round resident of the western United States and highland parts of Mexico, ranging from Vancouver through the Great Basin and the lowlands and foothills of California to southern Mexico and Guatemala.

The American bushtit is one of the smallest passerines in North America, at 11 cm (4.3 in) in length and 5–6 g (0.18–0.21 oz) in weight. It is gray-brown overall, with a large head, a short neck, a long tail, and a short stubby bill. The male has dark eyes and the adult female, yellow. Coastal forms have a brown "cap" while those in the interior have brown "mask."

The American bushtit is active and gregarious, foraging for small insects and spiders in mixed-species feeding flocks containing species such as chickadees and warblers, of 10 to over 40 individuals. Members of the group constantly make contact calls to each other that can be described as a short spit.

This species produces an elaborate pendant nest of moss and lichen assembled with spider silk and lined with feathers.

The "black-eared" bushtit was formerly considered a separate species (P. melanotis). It can be identified by its dark ear patch (the auricular). This polymorphism does not occur in the northern part of the American bushtits' range, but is first noted near the Mexican border, primarily in Texas. Most individuals with the black ear patch in that area are juvenile males, and none are adult females – some have only one or two dark lines on the face instead of a complete patch. The black-eared form becomes more common southward in the northeastern (but not the northwestern) highlands of Mexico until from central Mexico south, all males have a complete black ear patch and even adult females have a black arc over the eye and usually a black line through the eye.

The nest of the American bushtit:

All content from Kiddle encyclopedia articles (including the article images and facts) can be freely used under Attribution-ShareAlike license, unless stated otherwise. Cite this article:
American bushtit Facts for Kids. Kiddle Encyclopedia.