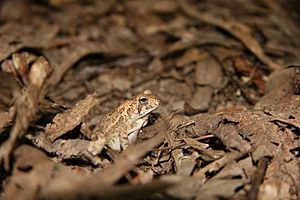 The specific name, fowleri, is in honor of naturalist Samuel Page Fowler (1800–1888) from Massachusetts, who was a founder of the Essex County Natural History Society, which later became the Essex Institute.

Fowler's toad is usually brown, grey, olive green and rust red in color with darkened warty spots. If the toad has a pale stripe on its back it is an adult. The belly is usually uniformly whitish except for one dark spot. The male may be darker in overall color than the female.

Fowler's toad reproduces in warmer seasons of the year, especially in May and June. It breeds in open, shallow waters such as ponds, lakeshores, and marshes. The male produces a call which attracts not only females, but also other males. The calling male may attempt to mate with one of the other males, which will then produce a chirping "release call", informing him of his mistake. When he finds a female, the pair will initiate amplexus and up to 7,000 to 10,000 eggs are fertilized. They hatch in 2 to 7 days. Based on observations, Fowler's toads breed repeatedly through the spring. As many as 10 different age classes, separated by several days, have been observed over the course of a breeding season in one small pond. A new tadpole may reach sexual maturity in one season, but the process may take up to three years.

Predators of Fowler's toad include snakes, birds, and small mammals. It uses defensive coloration to blend into its surroundings. It also secretes a noxious compound from the warts on its back. The secretion is distasteful to predators and can be lethal to small mammals. The toad is also known to play dead.

Fowler's toad lives in open woodlands, sand prairies, meadows, and beaches. It burrows into the ground during hot, dry periods and during the winter.

The adult Fowler's toad eats insects and other small terrestrial invertebrates, but avoids earthworms, unlike its close relative, the American toad (Anaxyrus americanus). The tadpole scrapes algae and bacterial mats from rocks and plants using the tooth-like structures in its mouth. 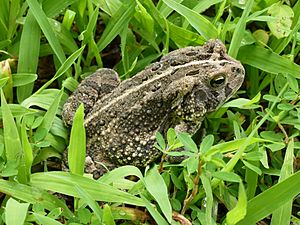 An important conservation measure for Fowler's toad is the protection of its breeding sites. Off-road vehicles commonly used in beach and dune habitats are damaging to this species. Agricultural chemicals have caused declines in some areas. It is considered a species at risk in Ontario, a species of special concern in the U.S. state of New Jersey, and a regionally threatened or endangered species in the states of New Hampshire and Vermont.

All content from Kiddle encyclopedia articles (including the article images and facts) can be freely used under Attribution-ShareAlike license, unless stated otherwise. Cite this article:
Anaxyrus fowleri Facts for Kids. Kiddle Encyclopedia.