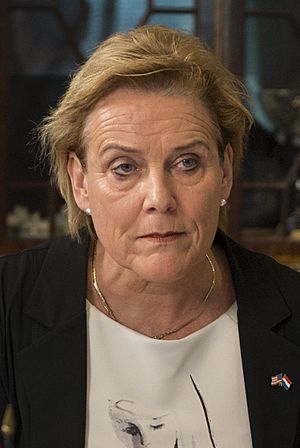 She is the current Defense Minister in the Third Rutte cabinet.

Bijleveld was born in a family, of which the father was in the military. After studying public administration at the Technical College of Twente, she became a municipal councillor of Enschede in 1986. She was chosen into the Second Chamber in 1989. She was successively mayor of the municipality of Hof van Twente from 2001 to 2007, deputy government minister in the Fourth Balkenende cabinet from 2007 to 2010, and King's Commissioner of the Province of Overijssel from 2011 to 2017.

Ank Bijleveld is married with two children, and is a member of the Catholic Church.

All content from Kiddle encyclopedia articles (including the article images and facts) can be freely used under Attribution-ShareAlike license, unless stated otherwise. Cite this article:
Ank Bijleveld Facts for Kids. Kiddle Encyclopedia.