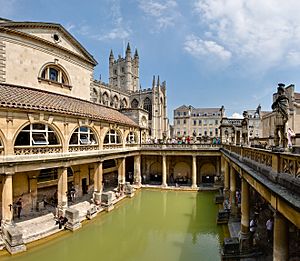 The Great Bath. Everything above the level of the pillar bases is of a later date.

Aquae Sulis (Latin for Waters of Sulis) was a small town in the Roman province of Britannia. Today it is the English city of Bath, Somerset. The Antonine Itinerary register of Roman roads lists the town as Aquis Sulis. Ptolemy records the town as Aquae calidae (warm waters) in his 2nd-century work Geographia.

In medieval times, the Roman temple at Bath was incorporated into British legend. The thermal springs at Bath were said to have been dedicated to Minerva by the legendary King Bladud and the temple there endowed with an eternal flame.

An 8th century poem in Old English, The Ruin, describing the ruinous changes that had overtaken a Roman hot-water spring, is assumed to be a reference to Aquae Sulis. The poem was copied in the Exeter Book for transmission to future generations. 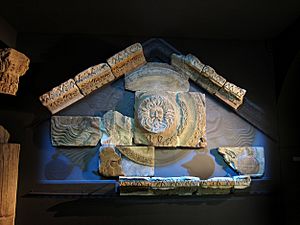 The Gorgon at Roman Baths Museum

Rediscovered from the 18th century onward, the city's Roman remains have become one of the city's main attractions. They may be viewed almost exclusively at the Roman Baths Museum, which houses:

All content from Kiddle encyclopedia articles (including the article images and facts) can be freely used under Attribution-ShareAlike license, unless stated otherwise. Cite this article:
Aquae Sulis Facts for Kids. Kiddle Encyclopedia.