Arana Hills is a suburb in the Moreton Bay Region, Queensland, Australia. In the 2016 census Arana Hills had a population of 6,810 people. 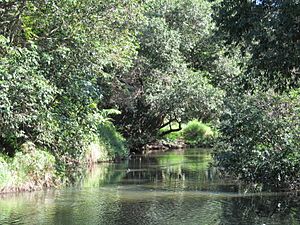 The first land purchaser in the Hills District was Edward Owens, Portion 12 (Patricks Road to Kedron Brook), in 1863 (now part of the locality of Ferny Hills).

The first land purchaser in the Arana Hills District was Henry St John Bridgeman in November 1863. This portion 9 parish of Bunya which covers a pocket of land bounded in part by Kedron Brook and Dawson Parade very soon became the property of William McCallum Park, who sold to the Patrick family at the turn of the century.

The first subdivision was in 1937, named Patricks Estate with central road named Grove Avenue. The lots were 1–2 acres (4,000–8,100 m2). Twenty-one years later, Camden Park Estate, being the 88 acres (36 ha) of other adjoining land formerly occupied by the Patrick family, was subdivided by Willmore and Randell. Prior to selling, from 1958 there were many problems of both access and water supply for which that firm agreed to provide some of the finance to the Pine Shire Council through this, the first of the small block housing estates in the shire. Other land estates to the north-west of the suburb were developed in the 1960s and 1970s.

The early residents started a Progress Association, whose effort brought to the attention of the relevant agencies, the needs of the growing community, e.g. postal services, specific road maintenance etc. On behalf of that association, Mrs Melva Welch commenced the special service of visiting each new family who moved to the area, giving them information on all local services, and, most importantly say "welcome". For twenty-eight years, the Adviser Newspaper, which was completely compiled and distributed by local volunteers under the umbrella of the Progress Association, brought to every home in the Hills district, news items from clubs, organizations and the Pine Rivers Shire Council (the name of the local authority had changed in 1959). Local businesses were encouraged to advertise for a very moderate fee, and the people who had been visited were also welcomed in the Adviser. Information gathered from the welcoming service visits also provided an accurate census on demographics in the suburb relating to future provision of services.

Prior to December 1962 when the new name was gazetted, the Queensland Place Names Board decreed that there were too many Camdens and Camden Parks, and this was confirmed when some confusion did occur with the area's mail being sent to Camden Park in South Australia.

There was consideration of many possible names before Mrs Pam Cory suggested that Arana, as an Aboriginal word for welcome, so Arana could just as well be transcribed as Orana or Urana.

Camden Park, a small triangular area in the middle of the original housing estate, retains the name as a reminder of earlier years, as does Camden Court. Mr George Willmore, the real estate developer, named many of the streets in the central Arana Hills subdivision in memory of the area around Sydney where he had lived.

Arana Hills is almost entirely a residential suburb, with 20% of its area as parkland. It has a mixture of 1960s-style chamferboard timber houses and more contemporary brick housing built upon steep hills, some with lovely city views. Some of the newer housing has been built on land in the northern part of the suburb adjacent to the land previously held by the Railways as a timber reserve, and which is now Bunyaville State Forestry Park. In this Arlington chain of estates developed in the early 1990s, it is still common to see horse riders around the Collins Road area, ducks and their ducklings crossing busy roads and the occasional koala perched high up in the many trees in the district.

In 2008, Arana Hills was affected by severe thunderstorms that also affected many properties in northern Brisbane, causing millions of dollars of damage. Many volunteers and SES crews were needed to help clean up the damage. The area has now returned to its original state, but with the loss of some trees.

Arana Hills is served by several neighbourhood shopping villages as well as a commercial indoor shopping complex anchored by a Kmart and Coles supermarket which opened in 1978. The area is also served by Brookside Shopping Centre, which is located 3 km to the East and the Great Western Super Centre, 3 km to the South-West. It contains one kindergarten, C & K, two privately run childcare facilities, one independent primary school, Pine Community School, with primary schools located in nearby Ferny Hills and Keperra (Grovely), as well as high schools located just beyond its boundaries in Everton Hills, Ferny Grove and Mitchelton. Arana Hills has its own fire station, library, medical centre and is well serviced by public buses and Grovely train station less than 1 km away. The main post office is located in the Kmart Plaza, with all four major banks within 500m. Arana Hills has many community run clubs and associations which are almost solely responsible for many of the sporting facilities being built. The Hills District of Ferny, Arana and Everton Hills community now have a commercially printed newspaper published monthly called the Echo.

The median age of the Arana Hills population was 35 years, 2 years below the national median of 37.

All content from Kiddle encyclopedia articles (including the article images and facts) can be freely used under Attribution-ShareAlike license, unless stated otherwise. Cite this article:
Arana Hills, Queensland Facts for Kids. Kiddle Encyclopedia.