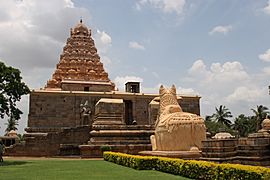 Ariyalur is administered by a municipality established in 1994. As of 2011, the municipality covered an area of 7.62 km2 (2.94 sq mi) and had a population of 28,902. Ariyalur comes under the Ariyalur assembly constituency which elects a member to the Tamil Nadu Legislative Assembly once every five years and it is a part of the Chidambaram constituency which elects its Member of Parliament (MP) once in five years.

All content from Kiddle encyclopedia articles (including the article images and facts) can be freely used under Attribution-ShareAlike license, unless stated otherwise. Cite this article:
Ariyalur Facts for Kids. Kiddle Encyclopedia.