Arizona City is a census-designated place (CDP) in southwestern Pinal County, Arizona, United States. It is located near the junction of Interstate 8 and Interstate 10 at the midpoint between Phoenix and Tucson, approximately 60 miles (97 km) from the downtown of both cities. The population was 10,475 as of the 2010 U.S. Census. It is estimated to be approximately 11,030 as of a 2017 U.S. Census estimate. Arizona City is a rural, primarily residential community that features a 48-acre (19 ha) man-made lake. These attributes make the community a popular snowbird destination, with the population increasing by as much as 5,000 people in the winter months to reach the census figure of 11,030.

It is not to be confused with the Arizona City that became the city of Yuma.

Arizona City first appeared on the 1990 U.S. Census as a census-designated place (CDP). 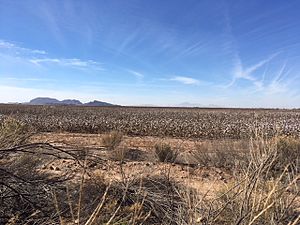 A cotton farm on the west side of Arizona City.

Historically, Arizona City's only employers have been the farms that surround the area and the few service jobs that exist within the townsite. However, being located in the middle of the Arizona Sun Corridor region, Arizona City's economy may soon be impacted by several large proposed attractions and factories that will potentially add 30,000 new jobs and attract up to 4 million visitors annually.

One of these developments is the Dreamport Villages project, which is a $4 billion destination resort that will be located 3 miles (4.8 km) north of Arizona City. This project will contain an extreme sports venue, water parks, restaurants, retail space, a residential area, and a fully themed amusement park comparable to Walt Disney World. Another approved project is the Attesa Motorsports Park, which will be a 2,360-acre (955 ha) motorsports complex featuring two 2.8-mile (4.5 km) road courses, a driver experience center, and an event center. This project alone is expected to create more than 10,000 permanent jobs and will be located 10 miles (16 km) to the northwest of Arizona City, adjacent to Interstate 8.

Phoenixmart, an under-construction 585-acre (236 ha) master planned development featuring showrooms, office space, warehouses, condominiums, a five-star resort and spa, and single family homes, is another one of these massive projects expected to boost the local economy. The Phoenixmart site is located approximately 10 miles (16 km) northeast of Arizona City and the first phase is expected to open in 2018. Lucid Motors, a Silicon Valley electric car company startup, has confirmed that it will build a $700 million electric car manufacturing plant in the nearby city of Casa Grande that will employ 2,000 workers by 2022.

Interstate 8 and transcontinental Interstate 10 intersect only 3 miles (4.8 km) north of Arizona City, providing freeway access to major Arizona cities such as Phoenix, Tucson, and Yuma, as well as San Diego and Los Angeles in California. Both freeways can be accessed via Sunland Gin Road. The main east-west surface street through the CDP is Battaglia Drive, which has an intersection with the main north-south street, Sunland Gin Road, at the north end of Arizona City at the community's only signalized intersection. Other main north-south surface streets in the community include Henness Road, Lamb Road, and Overfield Road. Major east-west surface streets include Alsdorf Road and Milligan Road.

Shopping within Arizona City is limited. The five main stores in town are a Dollar General, Ace Hardware, a Food Town IGA grocery store, and the locally owned Sunlite Market and Tumbleweed Market. There are a number of small local restaurants, as well as a Domino's Pizza location for in-town dining. Within the community there is also a public library, a smoke shop, a number of churches, and a drive-thru liquor store. Arizona City also has a Moose Lodge location (#1038) and a branch of the United States Post Office. For fuel and other services, residents must travel to nearby Casa Grande or Eloy.

All content from Kiddle encyclopedia articles (including the article images and facts) can be freely used under Attribution-ShareAlike license, unless stated otherwise. Cite this article:
Arizona City, Arizona Facts for Kids. Kiddle Encyclopedia.