State Road 2 (AR 2, Ark. 2, and Hwy. 2) is a former east–west state highway in the Arkansas Timberlands and Lower Arkansas Delta. The route was approximately 195 miles (314 km), and ran from US Route 67 (US 67) in Texarkana east to cross the Mississippi River near Lake Village, continuing as Mississippi Highway 10. On July 1, 1931, the route was entirely replaced by US Highway 82 (US 82) by the American Association of State Highway Officials (AASHTO). The route was maintained by the Arkansas Highway Department (AHD), now known as the Arkansas Department of Transportation (ArDOT).

Except near cities, the current US 82 closely follows the original 1926 routing. One section of State Road 2 original pavement, known as the Old Arkansas 2-Mayton Segment, survives north of Garland. It was listed on the National Register of Historic Places on May 16, 2008. 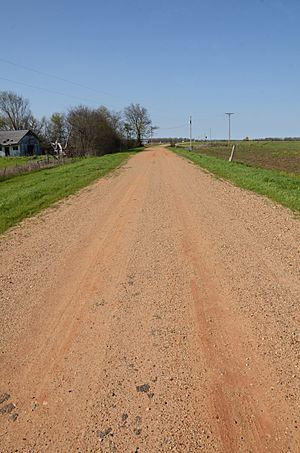 The route served the southern tier of counties in Arkansas, connecting several cities of regional importance. State Road 2 connected six county seats and included three toll bridges. State Road 2 also provided an important connection between the Arkansas Timberlands, approximately the western half of its Arkansas alignment, and the Arkansas Delta on the eastern half of the state.

Several bypasses have been built since the original 1926 routing following the growth of the cities it passes through.

All content from Kiddle encyclopedia articles (including the article images and facts) can be freely used under Attribution-ShareAlike license, unless stated otherwise. Cite this article:
Arkansas Highway 2 Facts for Kids. Kiddle Encyclopedia.