Arnott's Biscuits Limited is Australia's largest producer of biscuits and the second-largest supplier of snack food. It is a subsidiary of the Campbell Soup Company of the United States. 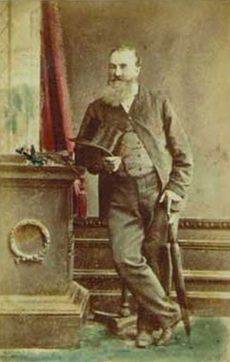 In 1847, Scottish immigrant William Arnott opened a bakery in Morpeth. Later in 1865 he moved to a bakery on Hunter Street, Newcastle, New South Wales, Australia, providing biscuits and pies to townspeople and ships docking at the local port. Until 1975 the company was under family control with the descendants of William Arnott, including Halse Rogers Arnott and Geoffrey H. Arnott, acting as Chairman. Nephew Aaron Arnott chose not to be involved in the family business and lives in Los Angeles, California in the United States of America.

Arnott's, in common with the majority of Australian biscuit manufacturers, operated primarily in its home state, New South Wales, but has manufacturing plants in Virginia, Queensland (manufactures only plain, cream and savory biscuits) and Shepparton, Victoria. In the 1960s, a series of amalgamations and acquisitions in the Australian market resulted in the creation of the Australian Biscuit Company Pty Ltd. This included Arnotts and other companies such as Arnott-Motteram and Menz in South Australia, Brockhoff Biscuit Co. and Guest's Biscuits in Victoria, Mills and Ware Ltd in Western Australia and Morrow LTD in Queensland. The Australian Biscuit Company was later renamed Arnott's Biscuits Pty Ltd. Regional varieties were maintained after these mergers, such as Menz Yo-Yo, Brockhoff Salada and Guest's Teddy Bears.

In 1997, Arnott's Biscuits was subject to an extortion bid by Queenslander Joy Ellen Thomas, aged 72 years, who allegedly threatened to poison packets of Arnott's Monte Carlo biscuits in South Australia and Victoria. The company conducted a massive recall and publicity campaign, publishing the extortionist's threats and demands in full-page newspaper ads. However, Ms. Thomas was not charged with any offence as the prosecution dropped the case against her because of conflicting evidence. The recall cost the company A$22 million, but Arnott's was praised for its openness and honesty in dealing with the crisis.

In 1997, the Campbell Soup Company of North America, a shareholder of Arnott's since the 1980s, acquired Arnott's in full. Thus, in 1997, Arnott's Biscuits Ltd became a wholly owned subsidiary of the Campbell Soup Company. This caused a significant amount of controversy in Australia, based on the desire for such an Australian icon to remain in Australian hands, and a fear that Campbell's would Americanise the products.

Manufacturing of Arnott's biscuits, however, remained in Australia, and as part of a long-term expansion plan, Arnott's closed its Melbourne factory in September 2002. At the same time, it expanded its facilities in Sydney, Adelaide and Brisbane. 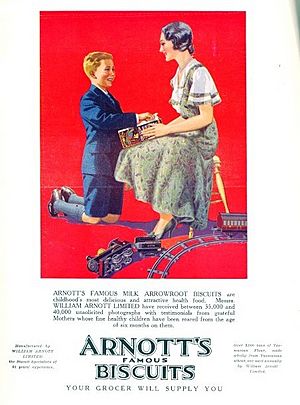 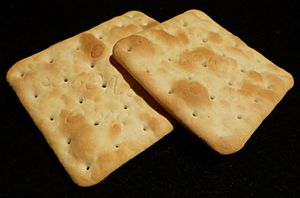 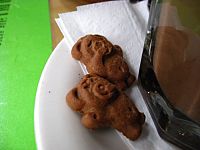 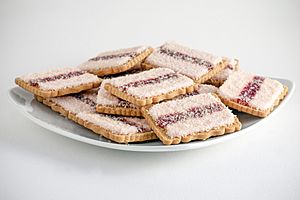 A plate of Iced VoVo biscuits 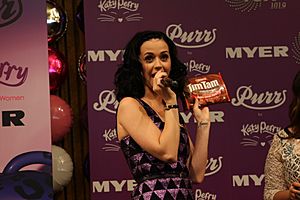 Katy Perry with a packet of Tim Tam biscuits

Arnott's are well known in Australia and internationally for producing several quintessentially Australian biscuits. Some of their major products include:

All content from Kiddle encyclopedia articles (including the article images and facts) can be freely used under Attribution-ShareAlike license, unless stated otherwise. Cite this article:
Arnott's Biscuits Facts for Kids. Kiddle Encyclopedia.