Arthur Henry Dutton (November 13, 1838 – June 5, 1864) was an American career soldier. A trained military engineer and high graduate of West Point, he served mostly as an infantry officer in the Union Army, fighting within both the Eastern Theater and Western Theaters during the American Civil War.

Dutton also helped raise and became the first commander of the 21st Connecticut Volunteer Infantry in late 1862. He was mortally wounded in action at Bermuda Hundred in late May 1864, and was posthumously breveted a brigadier general. 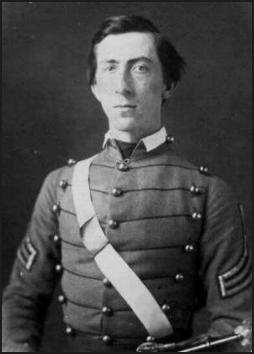 Dutton in his cadet's uniform while attending West Point.

On September 1, 1857, Dutton entered the United States Military Academy at West Point, and graduated 3rd out of 34 cadets on June 24, 1861. That year he also began attending Yale University in New Haven, but did not graduate. However his high class placement from West Point allowed Dutton to enter the prestigious U.S. Army Corps of Engineers, and he was appointed as brevet second lieutenant the same day he graduated. On August 3 Dutton was promoted to full Second Lieutenant in the regular army.

In the early part of the war he served as a staff officer of Brig. Gen. Joseph K. Mansfield in Washington, D.C., and then he commanded the defenses of Fernandina, Florida. In the fall of 1862, Dutton began to form and train the volunteer 21st Connecticut Infantry Regiment in Norwalk. On September 5 he was commissioned the unit's colonel and commanding officer. The 21st Connecticut was organized as part of the IX Corps, Army of the Potomac. He then brought his regiment to Washington on September 11, and by November they were posted to Arlington Heights in Virginia as part of the defenses of Washington. From November 7–19 Dutton and his regiment marched to Falmouth, Virginia, and that December they fought during the Battle of Fredericksburg.

For his actions during the Battle of Fredericksburg on December 13, Dutton was brevetted a major in the Regular Army, to date from the day of the battle. He then lead his regiment during the unsuccessful Mud March of January 20–24, 1863. Dutton then began exercising brigade command in the IX Corps in February, and he was promoted to First Lieutenant in the Regular Army on March 3. He next went to North Carolina and participated in the Siege of Suffolk that April and May. There Dutton led a brigade of the VII Corps, and for his actions during the efforts to hold Suffolk he was brevetted a lieutenant colonel in the Regular Army on March 3. On October 2 he was promoted to the rank of Captain in the Regular Army, and from January 14–February 16, 1864. he was stationed at Newport News, Virginia. Dutton next led a brigade in the XVIII Corps, Army of the James.

On May 26 Dutton was within Bermuda Hundred and was ordered to reconnoiter the opposing Confederate position with his brigade. Dutton advanced for about 2 miles and was on the skirmish line near Proctor's Creek, where he was hit mortally. He died of his wounds on June 5 in Baltimore, Maryland, and was buried at Arlington National Cemetery in Virginia. His family also erected a cenotaph to his memory at the In Memoriam Cemetery in Wallingford, Connecticut, where his brother Clarence was also later buried. He was posthumously brevetted to the rank of Colonel in the Regular Army and to Brigadier General of Volunteers for his actions at Bermuda Hundred.

A testimonial to Dutton was given by one of his fellow officers:

Colonel Dutton dies from the effects of his wounds June 5th. He graduated at West Point in 1861, Kilpatrick, Custar, O’Rourke, Benjamin, and Farquhar being among his classmates. Bold and chivalrous, with a nice sense of honor, a judgment quick and decisive, an unwavering zeal in his chosen profession, he was in every respect a thorough soldier. By his companions in arms he will never be forgotten, and to them his last resting place will be as a shrine commemorating the friendships which not the rude shock of war, nor lapse of time, can blight or destroy.

All content from Kiddle encyclopedia articles (including the article images and facts) can be freely used under Attribution-ShareAlike license, unless stated otherwise. Cite this article:
Arthur Henry Dutton Facts for Kids. Kiddle Encyclopedia.