Atropa belladonna, commonly known as belladonna or deadly nightshade, is a poisonous perennial herbaceous plant in the nightshade family Solanaceae, which also includes tomatoes, potatoes, and eggplant (aubergine). It is native to Europe, North Africa, and Western Asia. Its distribution extends from Great Britain in the west to western Ukraine and the Iranian province of Gilan in the east. It is also naturalised or introduced in some parts of Canada and the United States.

The foliage and berries are extremely toxic when ingested, containing tropane alkaloids. These toxins include atropine, scopolamine and hyoscyamine, which cause delirium and hallucinations, and are also used as pharmaceutical anticholinergics. These tropane alkaloids appear to be common in the family Solanaceae, as they are also present in plants of the genera Brugmansia, Datura and Hyoscyamus, of the same family but in different subfamilies and tribes than the nightshade.

Atropa belladonna has unpredictable effects. The antidote for belladonna poisoning is physostigmine or pilocarpine, the same as for atropine.

Atropa belladonna has a long history of use as a medicine, cosmetic, and poison. Known originally under various folk names (such as "deadly nightshade" in English), the plant was baptized Atropa belladonna by Carl Linnaeus (1707–1778) when he devised his classification system. Linnaeus chose the genus name Atropa because of the poisonous properties of these plants. Atropos (lit. "unturning one"), one of the Three Fates in Greek mythology, is said to have cut a person's thread of life after her sisters had spun and measured it. Linnaeus chose the species name belladonna ("beautiful woman" in Italian) in reference to the cosmetic use of the plant during the Renaissance, when women used the juice of the berries in eyedrops intended to dilate the pupils and make the eyes more appealing.

Extracts of plants in the deadly nightshade family have been in use since at least the 4th century BC, when Mandragora (mandrake) was recommended by Theophrastus for treatment of wounds, gout, and sleeplessness, and as a love potion. In the first century BC, Cleopatra used Atropine-rich extracts from the Egyptian henbane plant (another nightshade) for the above-mentioned purpose of dilating the pupils of her eyes.

The use of deadly nightshades as a poison was known in ancient Rome, as attested by the rumor that the Roman empress Livia Drusilla used the juice of Atropa belladonna berries to murder her husband, the emperor Augustus.

In the first century A.D. Dioscorides recognized wine of mandrake as an anaesthetic for treatment of pain or sleeplessness, to be given prior to surgery or cautery. The use of nightshade preparations for anesthesia, persisted throughout the Roman and Islamic Empires and continued in Europe until superseded in the 19th century by modern anesthetics. 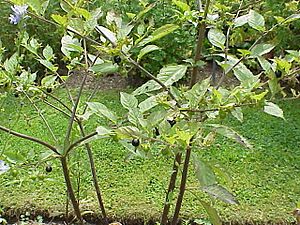 Atropa belladonna is a branching herbaceous perennial rhizomatous hemicryptophyte, often growing as a subshrub from a fleshy rootstock. Plants grow to 2 m (7 ft) tall with ovate leaves 18 cm (7 in) long. The bell-shaped flowers are dull purple with green tinges and faintly scented. The fruits are berries, which are green, ripening to a shiny black, and approximately 1.5 cm (0.6 in) in diameter. The berries are sweet and are consumed by animals that disperse the seeds in their droppings, even though they contain toxic alkaloids (see Toxicity). There is a pale-yellow flowering form called Atropa belladonna var. lutea with pale yellow fruit.

Atropa belladonna is native to temperate southern, Central and Eastern Europe; North Africa, Turkey, Iran and the Caucasus, but has been cultivated and introduced outside its native range. In southern Sweden it was recorded in Flora of Skåne in 1870 as grown in apothecary gardens near Malmö.

In Britain it is native only on calcareous soils, on disturbed ground, field margins, hedgerows and open woodland. More widespread as an alien, it is often a relic of cultivation as a medicinal herb. Seed is spread mainly by birds.

It is naturalized in parts of North America, where it is often found in shady, moist locations with limestone-rich soils. It is considered a weed species in parts of the world, where it colonizes areas with disturbed soils.

Atropa belladonna is rarely used in gardens, but, when grown, it is usually for its large upright habit and showy berries. Germination of the small seeds is often difficult, due to hard seed coats that cause seed dormancy. Germination takes several weeks under alternating temperature conditions, but can be sped up with the use of gibberellic acid. The seedlings need sterile soil to prevent damping off and resent root disturbance during transplanting.

The name Atropa belladonna was published by Carl Linnaeus in Species Plantarum in 1753. Atropa is derived from the name of the Greek goddess Atropos ('she who may not be turned aside' i.e. 'the inflexible' or 'the implacable')—one of the three Greek fates or destinies who would determine the course of a man's life by the weaving of threads that symbolized his birth, the events in his life, and finally his death, with Atropos cutting these threads to mark the last of these. The name "belladonna" comes from the Italian language, meaning 'beautiful lady'; originating either from its usage as a cosmetic to beautify pallid skin, or more probably, from its usage to increase the pupil size in women. 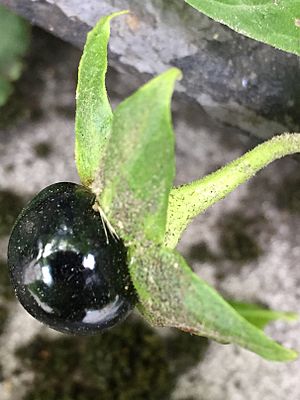 Attractively cherry-like, but highly toxic, fruit of Atropa belladonna L. The fruit is particularly dangerous to children. It is very similar in structure to its close cousin, the tomato.

Belladonna is one of the most toxic plants known, and its use by mouth increases risk in numerous clinical conditions, such as complications of pregnancy, cardiovascular diseases, gastrointestinal disorders, and psychiatric disorders, among others. All parts of the plant contain tropane alkaloids. Roots have up to 1.3%, leaves 1.2%, stalks 0.65%, flowers 0.6%, ripe berries 0.7%, and seeds 0.4% tropane alkaloids; leaves reach maximal alkaloid content when the plant is budding and flowering, roots are most poisonous in the end of the plant's vegetation period. Belladonna nectar is transformed by bees into honey that also contains tropane alkaloids. The berries pose the greatest danger to children because they look attractive and have a somewhat sweet taste. The root of the plant is generally the most toxic part, though this can vary from one specimen to another.

The active agents in belladonna, atropine, hyoscine (scopolamine), and hyoscyamine, have anticholinergic properties. The symptoms of belladonna poisoning include dilated pupils, sensitivity to light, blurred vision, tachycardia, loss of balance, staggering, headache, rash, flushing, severely dry mouth and throat, slurred speech, urinary retention, constipation, confusion, hallucinations, delirium, and convulsions. In 2009, A. belladonna berries were mistaken for blueberries by an adult woman; the six berries she ate were documented to result in severe anticholinergic syndrome. The plant's deadly symptoms are caused by atropine's disruption of the parasympathetic nervous system's ability to regulate involuntary activities, such as sweating, breathing, and heart rate. The antidote for belladonna poisoning is an anticholinesterase (such as physostigmine) or a cholinomimetic (such as pilocarpine), the same as for atropine.

Atropa belladonna is also toxic to many domestic animals, causing paralysis. However, cattle and rabbits eat the plant seemingly without suffering harmful effects. In humans, its anticholinergic properties will cause the disruption of cognitive capacities, such as memory and learning.

All content from Kiddle encyclopedia articles (including the article images and facts) can be freely used under Attribution-ShareAlike license, unless stated otherwise. Cite this article:
Atropa belladonna Facts for Kids. Kiddle Encyclopedia.