Since 1992, a total of 8 football clubs have become champions of the top Azerbaijani football competition. Neftchi Baku are the current Azerbaijan Premier League champions.

Players in the Premier League compete for the trophy "Azerbaijan Premier League Golden Boot", awarded to the top goalscorer at the end of each football season. Nazim Aliyev is the league's all-time top scorer with 183 goals, including 39 in the 1992 season. During the 1995–96 season he became the first player to score 100 Premier League goals. Since then, 10 other players have reached the 100-goal mark. 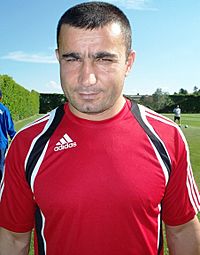 Gurban Gurbanov is one of the top goalscorers in Premier League and the most successful Azerbaijani manager in European competitions. 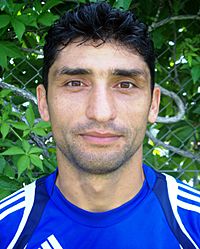 Aslan Kerimov is one of the players who has appeared the most time in Premier League matches.

All content from Kiddle encyclopedia articles (including the article images and facts) can be freely used under Attribution-ShareAlike license, unless stated otherwise. Cite this article:
Azerbaijani Premier League Facts for Kids. Kiddle Encyclopedia.