The wildlife refuge is located on the lands of the Luis Maria Baca Grant No. 4 near Crestone, Colorado in the San Luis Valley in southern Saguache and northern Alamosa counties, about 30 miles (48 km) northeast of the town of Alamosa, on the west side of the Sangre de Cristo Range.

The site was authorized by the United States Congress in 2000 as part of legislation that also authorized the nearby Great Sand Dunes National Park. It was formally established in 2003 when administration began under the United States Fish and Wildlife Service. It is administered jointly with the nearby Alamosa and Monte Vista National Wildlife Refuges, as part of the Alamosa/Baca/Monte Verde Complex. 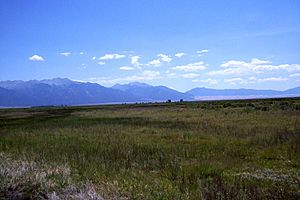 The Baca National Wildlife Refuge consists of rangeland and some riparian wetlands. The original ranch headquarters and other buildings are on the wildlife refuge. As is usual on federal wildlife refuges, grazing and hay production continue on a limited basis. It includes several thousand acres of irrigated hay meadows.

The establishment of the refuge and national park was part of complex land transfers undertaken by the federal government in cooperation with the Nature Conservancy and the State of Colorado. Approximately 3,300 acres (1,300 ha) of the land was previously under the management of the U.S. Bureau of Reclamation and was transferred to the Fish and Wildlife Service.

Approximately 97,036 acres (39,269 ha) of the land for the refuge and park was part of the historic Baca Ranch and was purchased by the Nature Conservancy before its transfer to the federal government. The refuge forms part of complex of wetlands in the San Luis Valley consists of lands of nearby landowners, including the Colorado Board of Land Commissioners, the National Park Service, and the Nature Conservancy.

The mineral rights to the lands of the Baca NWR are owned by a third party, Lexam Explorations (U.S.A.) Inc. (Lexam). There is believed to be a small chance that commercial quantities of natural gas may be discovered (An existing artesian well on the land, called "the gas well", produced enough gas to heat one home).

Litigation by the San Luis Valley Ecosystem Council contesting the environmental assessment with respect to the drilling of two exploratory wells resulted in a settlement in September, 2010 requiring preparation of a new assessment by the U.S. Fish and Wildlife Service. Completion of a draft environmental assessment was announced by the Fish and Wildlife Service on January 7, 2011 and was made available for download or viewing at the refuge's website.

A public meeting was held in January 2011 at the Colorado College Baca Campus Conference Center in Crestone, Colorado. It was an informational open house with a presentation by the Fish and Wildlife Service followed by a question-and-answer session. Written comments regarding the environmental assessment were accepted at this meeting.

The draft assessment includes consideration of the option of purchasing the mineral rights but rejects the $8.4 million demanded by Lexam as not a fair market price. By the terms of a Federal District Court settlement the final environmental assessment is due April 1, 2011.

All content from Kiddle encyclopedia articles (including the article images and facts) can be freely used under Attribution-ShareAlike license, unless stated otherwise. Cite this article:
Baca National Wildlife Refuge Facts for Kids. Kiddle Encyclopedia.