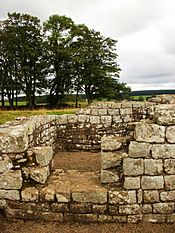 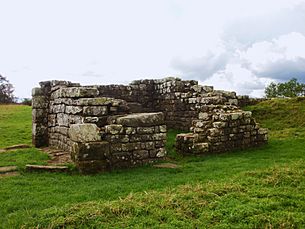 The archaeological remnants of the east gate (left) and south gate (right) of the Roman Fort enclosure.

Banna, now known as Birdoswald Roman Fort, was a fort, towards the western end of Hadrian's Wall, in the Roman province of Britannia. Today the site is occupied by a former farm called Birdoswald. As of 2005[update], it is the only site on Hadrian's Wall at which significant occupation in the post-Roman period has been proven, and it is subject to a long-term archaeological programme under the directorship of Tony Wilmott.

It is one of the best preserved of the 16 forts along Hadrian's Wall. The fort is situated in a commanding position on a triangular spur of land bounded by cliffs to the south and east overlooking a broad meander of the River Irthing in Cumbria. In Roman times, the fort was known as Banna ("horn" in Celtic), reflecting the geography of the site.

Cumbria County Council were responsible for the management of Birdoswald fort from 1984 until the end of 2004, when English Heritage assumed responsibility.

The fort was occupied by Roman auxiliaries from approximately AD 112 to AD 400. In this western part of Hadrian's Wall, the wall itself was originally built from turf, later replaced with stone (Hogan, 2007). The stone fort was built some time after the wall, in the usual playing card shape, with gates to the east, west and south. Inside were built the usual stone buildings, a central headquarters building (principia), granaries (horrea), and barracks. Unusually for an auxiliary fort, it also included an exercise building (basilica exercitatoria), perhaps reflecting the difficulties of training soldiers in the exposed site in the north of England.

The fort has been extensively excavated for over a century, with twentieth century excavations starting in 1911 by F.G. Simpson and continuing with Ian Richmond from 1927 to 1933 . The gateways and walls were then re-excavated under the supervision of Brenda Swinbank and J P Gillam from 1949–1950. Excavations between 1987 and 1992 showed an unbroken sequence of occupation on the site of the fort granaries, running from the late Roman period until possibly 500AD. The granaries were replaced by two successive large timber halls, reminiscent of others found in many parts of Britain dating to the 5th and 6th centuries. Tony Wilmott (director of the excavations) has suggested that, after the end of Roman rule in Britain, the fort served as the power-base for a local warband descended from the late Roman garrison and possibly deriving legitimacy from their ancestors for several generations.

Extensive geophysical surveys, both magnetometry and earth resistance survey, were conducted by TimeScape Surveys (Alan Biggins & David Taylor, 1999 & 2004) between 1997 -2001. These surveys established that the sub-surface remains in the fort were well preserved. The later surveys detected two vici (civilian settlements) of different characters on the eastern and western sides of the fort. The surveys by TimeScape also determined the location of a bathhouse in the valley of the River Irthing.

An area between the fort and the escarpment was excavated by Channel 4's archaeological television programme Time Team in January 2000. The excavation detected signs of an extramural settlement (vicus), but the area is liable to erosion and the majority of the vicus could have fallen over the cliffs. 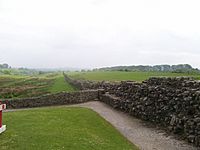 The two mile sector of Hadrian's Wall either side of Birdoswald is also of major interest. It is currently the only known sector of Hadrian's Wall in which the original turf wall was later replaced by a stone wall on a different line. When the rebuilding took place (probably in the 130s) the line of the wall was moved approximately 50 metres further north, to line up with the fort's north wall, rather than its east and west gates. The reasons for this change are unclear, although David Woolliscroft (Woolliscroft, 2001) has plausibly suggested that it was the result of changing signalling requirements. At any rate, this remains the only area in which both the walls can be directly compared.

Approximately 600 metres east of Birdoswald, at the foot of an escarpment, lies the remains of Willowford bridge. This carried Hadrian's Wall across the River Irthing. The westward movement of the river course over the centuries has left the east abutment of the bridge high and dry, while the west abutment has probably been destroyed by erosion. Nevertheless, the much-modified visible remains are highly impressive. Until 1996, these remains were not directly accessible from the fort, but they can now be reached by a footbridge that was lowered into position by an RAF Chinook helicopter.

The fort at Birdoswald was linked by a Roman road, sometimes referred to as the Maiden Way, to the outpost fort of Bewcastle, seven miles to the north. Signals could be relayed between the two forts by means of two signalling towers. 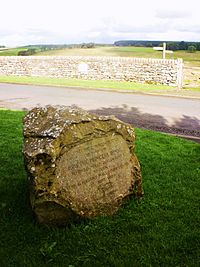 Engraved stone erected to commemorate the opening of the fort's study centre by Princess Anne in June 1999. 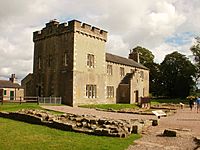 The 19th-century farmhouse constructed on the site of Birdoswald Fort.

Today the fort's site is operated by English Heritage as Birdoswald Roman Fort. The visitor centre features displays and reconstructions of the fort, exhibits about life in Roman Britain, the site's history through the ages, and archaeological discoveries in the 19th and 20th centuries. Visitors can walk outside along the excavated remains of the fort.

All content from Kiddle encyclopedia articles (including the article images and facts) can be freely used under Attribution-ShareAlike license, unless stated otherwise. Cite this article:
Banna (Birdoswald) Facts for Kids. Kiddle Encyclopedia.