Santa Clara (PSGC: 031423021) is one of the twenty-four barangays composing the municipality of Santa Maria, Bulacan, in the Philippines. It is bordered by Barangay Lalakhan on the southwest, Bagbaguin on the south, Poblacion on the east, Sta. Cruz on the north and Barangay Tambubong in Bocaue on the west.

Sta. Clara is the 17th largest barangay in Santa Maria with a land area of 214.70 hectares or 2.1470 km2, slightly smaller than the barangay of Poblacion.

Sta. Clara is located on the south-west portion of Sta. Maria and thirty-three kilometers north from Manila.

The prevailing climatic conditions in the barangay are categorized into two types: dry and wet season.

This is the projected population of the barangay by the next few years: 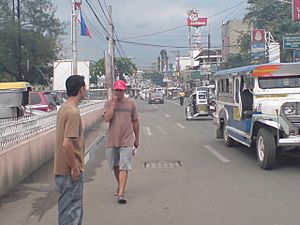 Members of the Sangguniang Barangay

VISION: A self-reliant, industrialized, commercialized, environment friendly barangay, accessible roads, discipline and morally upright citizenhood and a place where you can say "I BELONG"

MISSION: "Discipline and Determination" by discharging responsible services to the needs of people and continuing communication.

Barangay Sta. Clara is a sub-center of RHU-I. This center serves the total population of 10,052 of the barangay.

The Health Center is open daily except on Thursdays.

It is currently headed by Ms. Catalina C. Policarpio.

Public vehicles such as buses, jeepneys, and tricycles are the means of transportation in the barangay. Tricycles are available for 24 hours.

All content from Kiddle encyclopedia articles (including the article images and facts) can be freely used under Attribution-ShareAlike license, unless stated otherwise. Cite this article:
Barangay Santa Clara, Santa Maria, Bulacan Facts for Kids. Kiddle Encyclopedia.